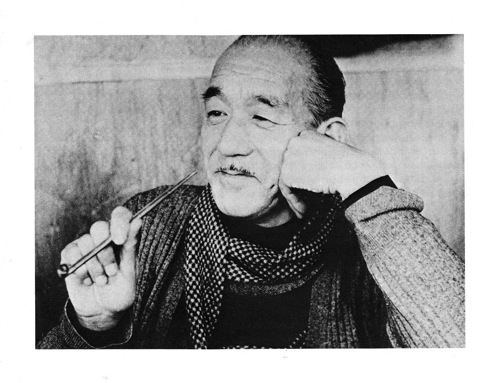 Like a cat sitting on a Tokyo living room floor you watch the family dramas of YASUJIRO OZU (1903-1963), never looking around, never moving a muscle, for fear of being seen. The 13 films from 1949 to 1962 that people mean when they say “Ozu” (with titles like Late Spring, Early Summer, and Late Autumn), the same few actors playing roughly the same characters negotiating the same problems of tradition vs. progress, these films tend to melt together in a postwar sake haze, and you are left with the sensation of a repeating slideshow from a series of knee-high cameras. Striped smokestacks rise in front of mountains, power lines bisect ancient temples, Japanese and English words compete on electric signs, the future advances on the past. The characters in all senses bound by these dichotomies, understanding that the limits of their world do not allow for even the simple conditions necessary for their happiness, and recognizing the potential for fulfillment only in the suspicion that the opportunity has passed them by. Seated fathers and daughters staring into the camera, looking right through you, deciding to part ways. A grandmother walking down a hallway. A young girl crying, then smiling through lines like, “Isn’t life disappointing?” and her widowed sister’s response, “It certainly is.” Considered the greatest narrative director by many who keep such lists, Ozu’s grave bears the character “mu,” Nothingness, appropriate for one whose work suggests that the greatest virtue and only way forward may be the acceptance of disappointment.

On his or her birthday, HiLobrow irregularly pays tribute to one of our high-, low-, no-, or hilobrow heroes. Also born this date: Sheila E.