When we get there, will we remake Mars in our image? And if so, what image is that? 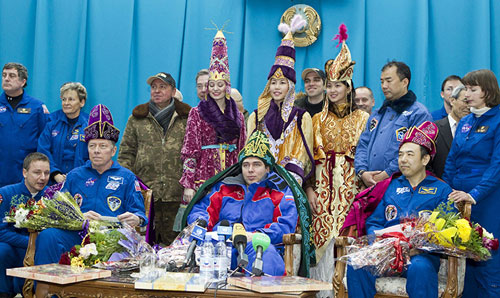 It’s been a busy week in the Martian Chronicles. In the latest Extraterrestrial Extra, a new rover has launched, while over in the Class-M Metropolitan section, we find the Russians have landed.

Curiosity, the rover in question, is NASA’s new Martian surface probe, following in the diligent wheels of Spirit and Opportunity. As big as an earth-bound Mini Cooper, it has shed its decorative carapace in favor of a more skeletal utility, arrayed with antennas, collection tools, a weather station and a laser, along with a 3D camera designed by James Cameron. 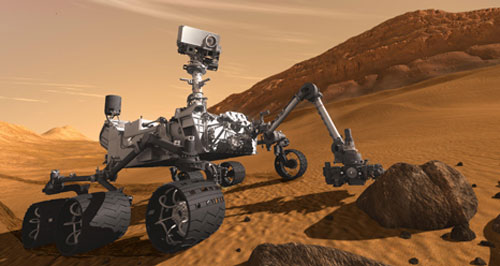 This time we won’t be dropping it onto the surface encased in space bubble wrap, but will attempt a more controlled descent with a combination jet-pack-and-tether system. Curiosity will comb the Gale Crater, searching for signs of once and/or ancient life. If it finds any, it will presumably shoot them. Whether with camera or laser will undoubtedly depend.

Wait — what was that about the Russians?

It’s all true, dear reader, the Russians have landed. That is, Mars500 has landed, the pre-enacted simulation flight to and from the red planet, conducted in full in a parking lot outside Moscow. “Launched” in June 2010, the international, all-male crew of simulnauts entered the capsule, and committed to remain inside, in order to research the psychological effects of confinement during a months-long space journey, briefly profiled here on HiLobrow.

In-flight, they conducted scientific experiments, worked out, ate MREs, and communicated in short bursts with the proper signal delay encoded in advance. Mid-journey, in February 2011, they were allowed out to explore the surface (the parking lot), then bundled back inside for the return journey. Earlier this month, the Russian Parking Lot Martians then successfully returned to earth (the parking lot) and exited the capsule, reportedly none the worse for wear. There is no confirmation on the presence of Mock Apple Pie at the successful completion of the mock-up.

Proto-martians, like the rovers and the Russian simulnauts, have been selected, like their cosmo- and astronaut comrades on the animal planet, for unflappability and laser-like focus to the task at hand. But if this becomes a regular thing, who do you think is really going to go out there? Will it be ranks of rational Glenns, dutifully transforming our neighbor into a compatible Class-M planet? Will it be a humanized version of the Laika-less rovers, a nexus of cyborg technology perhaps, extracting natural resources and maintaining machinery in Tayloresque perfection?

It’s another planet. It’s a rock. Never mind water, we’d have to bring our own air. We’d have to love naked mole rat-like social compression, then equally love the vast space tundra, without a sound or a sight from home. We’d need to be hypersocial and domestic, then flip a switch to cowboy-loner, so alienated as to not even feel the absence of an open range. How many experiments in isolation do you really think you can do? How would you manage your social media addiction, which only intensifies as the distance and gaps prevent its easy pursuit? When do you start idly scanning the perimeter for animate anomalies? When do you start hoping to see them?

That does not describe a rational landscape, either outer or inner. What it describes is something closer to — crazy.


[William Shatner in Nightmare at 20,000 Feet, Twilight Zone, 1963]
***
HiLobrow salutes outer and inner explorers everywhere, as well as the embedded irrationality in our rational agencies.