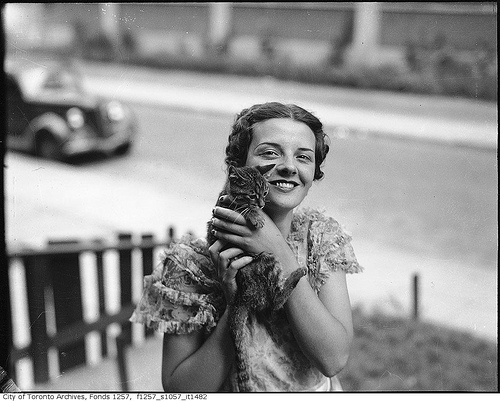 Your whip was at the crime scene. Break-in, there
at Gotham’s Petting Zoo. Cat burglary —
you took a cage of lynxes. Dawned on me
to search the floor for fur, and I found hair

too long and straight and dark, just like your stare;
been searching zoos, invading surgeries
at animal hospitals all night; I need
you to return my call. I swear

your alter ego’s name is safe with me.
I need it that way, need her to stay clear
and skylined on skyscrapers’ tips, to flee

from me, but not this far ahead. I’m near
now, on the fire escape. Pick up. I see
your shadow on the blinds. I hear your purr.

In the spirit of our Epic Wins series, Chad Parmenter’s cycle of Batman poems will be appearing through the week. Photo via Toronto History on Flickr.