A version of this essay first appeared as The New Flesh in Craig Baldwin’s OtherZine 21, Fall 2011. 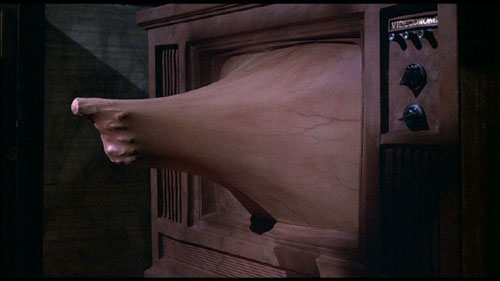 Video is everywhere. Video is on your computer, on your phone. There are entire sites dedicated to nothing but video. It’s been on your TV, it seems, forever. And often, it’s your video. Not only the consumption but the production of video has never been easier. Shoot, edit, upload, show, in not weeks, but minutes. Video is omnipresent and completely embedded.

But embedded with it is a hidden agenda.

When movies first appeared on the scene, they moved into a specialized environment that seemed pre-built for them, the theater. Early films took many of their compositions and plotlines from theater and plays, but equally important to the experience was how films were viewed: in a darkened, enclosed room, all seats facing forward, eyes focused upon the plane of action. The audience was embedded in the environment, an environment in which viewers were encouraged to forget about themselves and their lives and even the theater itself.

As films moved away from the literal staginess of theater and into more “naturalistic” representations allowed by lenses and camera technologies, the viewing experience became even more Freudian; we lost ourselves in the story by projecting onto the hero (or heroine), and living the scripted life for an hour or two. 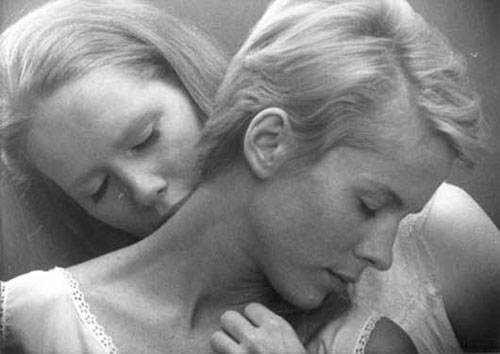 To some extent we do this with any story, in any medium: fiction, storytelling, radio plays. But film almost had it all. We couldn’t touch them but they could touch us, emotionally and adrenally, stimulating our nervous systems and activating our empathy.

Some radical theorists decried this tendency as escapism and reaction; Bertold Brecht claimed famously that “art is not a mirror held up to reality, but a hammer with which to shape it.” By this he meant not that it is (very often), but that it should be. Critical distance (Verfremdungseffekt) was what he offered instead, as an oppositional, even revolutionary, perspective, both for art-makers and audience. “[Verfremdungseffekt] prevents the audience from losing itself passively and completely in the character created by the actor, and consequently leads the audience to be a consciously critical observer.” By not losing yourself, you could perhaps find purpose.

Brecht was discussing theater (in the mid-1930s) but his directive has been applied to any art form with immersive tendencies: film, TV, videogames, virtual reality, LARPing, the internet. In other words, don’t anesthetize yourself with action and melodrama while the world outside goes to hell. Use the experience of art to become politicized, see art not as an escape but as part of a shared continuum of existence, use your desire for a better world to build one, not just to dream. See art as embedded in, not separate from, real life.

The first video embed wasn’t on a computer, it was in your living room. VHS tapes moved movies out of the movie theater and into the house. The smaller screen shared attention with the cluttered room, the eclectic seating, the lights, the refrigerator, the family, the pizza delivery, and all the other distractions that one normally needed to tune out in order to focus on a film. Except that we didn’t tune them out. We let them in; talking and eating in front of the set, pausing to do something else, de-emphasizing the designated experience into a mere feature of a larger, busier environment. Movies on video were no longer projected, and we stopped projecting as much into them. Video became one element in a busy environment, more installation than destination.

Actually, we can back up further and consider the phenomenon of the drive-in, which greatly increased distraction with the elimination of three of the four theater walls. But the drive-in, besides having the immersive advantage of a huge screen, was a seasonal option, only available in some communities and only for some films; it never reached out and in the way the VHS player did.

The embed tag in HTML embeds not just a video, but critical distance along with it. When the environment is less totalizing and immersive, the individual becomes more prominent, more alienated. Videos always need to be embedded in something. Even films were embedded in the theater environment, but one that was set up to decrease distractions and deprioritize the embed.

Online video is always immersed in turbulence. A webpage has other features, often simultaneous videos and gifs, like advertising banners and sidebars, that not only compete for but invite our attention: buttons, sliders, that Google search lozenge, Twitter alerts. Video on mobile devices may fill the screen (minus the play/pause and other buttons that fade in and out, on touch) — but the screen is tiny, and the entire rest of the world that’s bigger than your hand not only comes flooding back in, it has never left. A video is just one moving data point in an information-overloaded array, the array called Your Everyday Life.

But despite the embedding of Verfremdungseffekt online, and in life, Brecht would still not be satisfied. Because although critical distance allows potential space within which to be critical, there is no obligation to do so. You can do whatever you want in that distance: fuss with the dog, argue with your girlfriend, order takeout, get on the phone, text, drive.

Installation-based, deprioritized stories have set us free from a potentially infantilizing immersion. But in that divestiture they do not — indeed they can not — control our activities, or point of view. The irony of Mephisto is that he eventually wielded his hammer in the service of evil.

What we do with our freedom is, as usual, up to us. 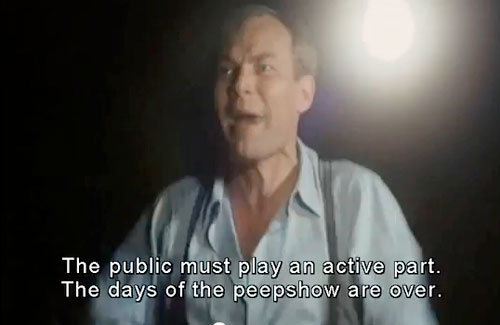