Last year we had Keanu. This year we have Twitter.

The connection being James Joyce, Ulysses, and Bloomsday, that fictional breakthrough into the actual calendar that occurs every June 16, in minds and performances all over the world.

Tap. Tap. Stripling, blind. Frowsy whore. Put you off stroke. Let her pass. Must be the bur. No-one behind. Coming. Pprrpffrrppfff. Done.

Some Bloomsday celebrations are pub-crawls, some are staged readings, and some are almost-LARPs wherein real Dublin stands in for its fictional variant — or where some completely different location becomes the streetview upon which “Dublin” is mapped.

O, but you missed Dedalus on Hamlet. —I’m sorry, he said. Shakespeare is the happy huntingground of all minds that have lost their balance

With the @11ysses project, textual performers were sourced from the crowd (of volunteers) and assigned sections of the novel, to parse for Twitter. This is not a word-for-word transposition from the novel into a Twitterstream which, as Stephen from Baltimore, the creator of the experiment, states, might not port well into the new space — a space with additional limitations, but with its own, novel (yet non-novel) expansiveness.

What has resulted is a series of poetic responses to an already poetic text — an interpretive dance mapped onto the space of Ulysses, an enjoyable gloss for those for whom it sluices underground in that river of longreads — or a provocative invitation for those for whom it hovers, unread, just over the left shoulder as one walks down the street . . .

Mr. Bloom turned over idly pages…He read where his finger opened. Feel! Press! Chrished! —Sweets of Sin, he said…That’s a good one.

And if this inspires just one person to attempt a more poetic use of Twitter in the onrush of their everyday, then the experiment may be deemed a success. 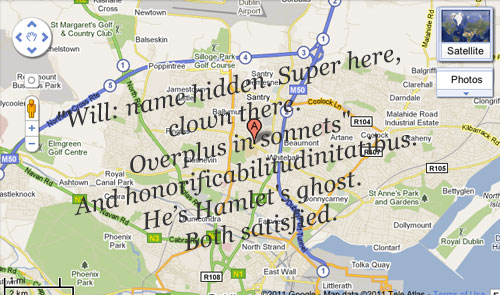