First in a series of posts using the rebooted Battlestar Galactica franchise as a lens through which to view museums’ challenge to reinvent themselves. (Series intro here.)

In a paper on the Networked Aquarium for Marine Technology Society Journal, Tom Hennes wrote, “By creating live links to the wild places our constructed habitats represent, we add a powerful dimension of reality and relevance to them.” If pop culture is a considerable part of our place of residence, then it’s time to connect the constructed habitats of our institutions to the wilds of our daily lives.

Pop culture offers literal inspirations for the museum designer. Nina Simon has written about the effective ways that a music museum might be a good site for memorialization of a recently-dead musician; and the Brooklyn Museum of Art created a fashion boutique to accompany a design exhibition. I believe that opportunities exist for thinking about activities, relevancy, information systems, and possibilities for new ways to create and sustain communities. I suggest that we begin the exploration where BSG starts; let’s ask: how do we turn the workings of an old ship around and make it instantly adaptable and effective?

When war unexpectedly breaks out during its decommissioning ceremony, the Galactica must both reignite its old, designed intentions and fight with a relevance capable of conquering something new. The issue of relevance has been a long-standing conversation within the museum community. According to her 2006 article for the American Association of Museums, Emlyn Koster writes

Ninety years ago at AAM’s conference in Washington, D.C., John Cotton Dana presented a paper entitled “Increasing Usefulness of Museums.” He elaborated on his prescient views that museums should be “life-enhancing institutions” and that “a museum is good only insofar as it is of use.” Another of Dana’s unequivocal statements was on the museum’s responsibility to fit the needs of its community.

Speaking of usefulness, and fitting the needs of the community: In order to launch starfighters to oppose the rapidly approaching Cylons, Galactica’s pilots must actually knock over the museum stanchions surrounding the mothballed fighters. The pilot Starbuck informs Commander William Adama that they’ll need to move the fighters to the port bay rather than launch from the starboard bay, which is closer. Why? Because the starboard bay has been turned into a gift shop. 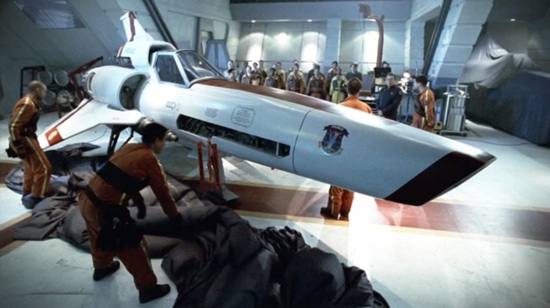 The Battlestar needs to do more than simply access the decommissioned fighters. To honor Commander Adama, Galactica deploys an outdated Viper Mark II fighter — piloted by Adama during the first Cylon war — to fly during the decommissioning ceremony. This fighter, initially thought at a disadvantage due to its obsolete technology, is one of the few starfighters to initially survive the Cylon attack. As we learn in the second episode of the miniseries, the Mark II’s older technology resists the computer viruses infecting the newer fighters’ navigation systems (part of the Cylon assault strategy). The Galactica learns from this experience that the older artifact is unexpectedly, newly relevant; a re-evaluation of the sense of antiquity and appropriateness ensues, causing the Battlestar to reignite older fighters and retrofit newer technologies, informed by useful older paradigms.

So the museum-quality barriers are taken away, the fighters are moved, the exhibit spaces are reclaimed, and the Galactica lives to fight another day. The institution survives because it has shifted focus from the past to the present and future. Which puts me in mind of something James Vaughan wrote in the National Trust for Historic Preservation’s Forum Journal: “The historic site community must reaffirm the importance of these places for our nation’s future and redefine our mission in terms of that future rather than the past.”

America’s historic sites offer unique opportunities for learning, for reflection, for inspiration. At their best, they can be powerful places that provide great value to their communities. They can offer programs, services, and experiences that are relevant to many of the most pressing issues of our day. America’s historic sites should be places to nurture the human spirit.

How can museums retrofit themselves in order to nurture the human spirit? Taking risks in order to innovate is one avenue explored in BSG; crowdsourcing is one example of such risks, and building relationships is a key aspect of both. 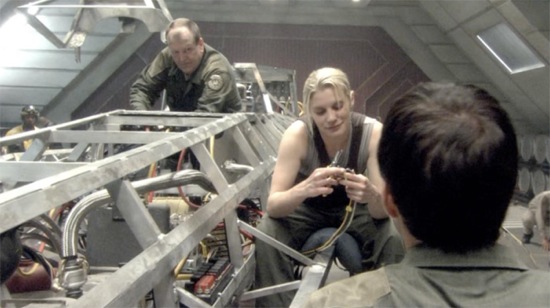 By BSG Season 2 (episode 9), the human spirit is deeply weary. The Galactica’s fighters — having already reached artifact status at the time of the breaking war — have a difficult time surviving the intensive, unyielding necessity for use. They need constant repair, and the parts are running out. In a moment of spiritual desperation, Chief Tyrol (head of the deck crew) decides to build a new Viper from scratch.

This plan is barely supported by his own crew at first, as they feel daunted by the lack of technical expertise they suppose they don’t have, and even less supported by the old guard Executive Officer, Colonel Tyghe. In a conversation in the command center, Admiral Adama asks Tyghe if he’s seen Tyrol’s fighter; “His imaginary fighter? I don’t need to see it,” Tyghe replies. “I know it’s a waste of time. We’ve got to focus on the fleet we have left and not get bogged down in some pipe dream.” 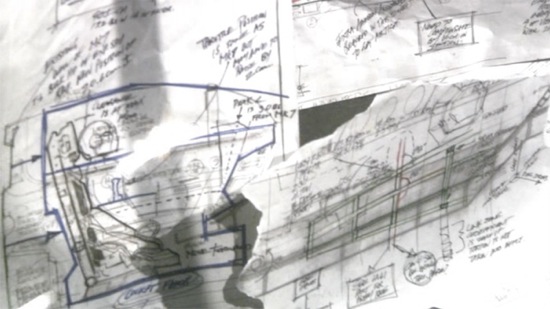 Ultimately, Tyrol and his crew source sufficient technological knowledge and ingenuity from the crowd of pilots, deck, and command center crew to build a working ship. Upon seeing the progress and camaraderie happening around the starfighter build, Tyghe eventually helps Tyrol source usable parts from another ship in the fleet. In addition, the team not only builds a fighter to known specifications from other successful fighters, they also add in something new. When the team finds insufficient metal to clad the body, Helo suggests that they use carbon composite. Due to the difficulty of detection of this metal on the navigation system, the Galactica team simultaneously creates a new, usable fighter and their first stealth fighter. This creation not only proves valuable in battles that occur later in the series, but also lifts the spirits of all involved and lays the groundwork to support risk-taking ingenuity, as necessary due to circumstances, later on. 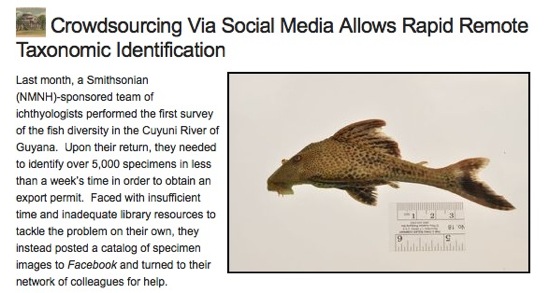 Clay Shirky writes, in Cognitive Surplus, about laying the groundwork to take risks in order to innovate: “[C]reating the most value from a tool involves not master plans or great leaps forward but constant trial and error. The key question for any society undergoing such a shift is how to get the most out of that process.” Tyrol’s self-initiative succeeds because he is in a position, and allowed by the institution, to re-imagine his environment. Galactica gives him permission to experiment, and he achieves a solution to this complex problem because he utilizes the most valuable resources — in his case, his colleagues’ knowledge — at his disposal. In recent years, a number of venerable institutions have found crowdsourcing fruitful — from the Greenwich Observatory’s Solar Stormwatch to the Smithsonian NMNH’s use of Facebook to identify Guyanan fish to Brooklyn Museum of Art’s use of crowds to tag their online collection. 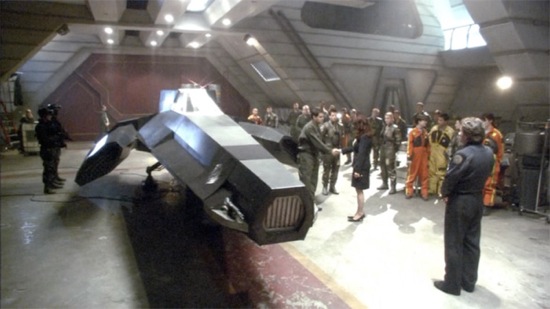 The creation of the Blackbird (the Galactica’s nickname for the stealth fighter) came out of a pragmatic necessity for a new ship; it also derived from a need for a spiritual rejuvenation. Crucially, the project was also about building relationships. By working together, the participants built a fighter; more importantly, they solidified their relationships to one another and commitment to the larger, institutional survival. They dedicated the new fighter to the president, Laura Roslin, figurehead of the greater survivor community.

However, not all ships hold up as well as the newly created Blackbird. The Galactica itself shows wear and tear over the series’ five years, leading to a statement made in the Season 4.5 episode titled “No Exit” about the battleship: “This old girl was 50 years old when the war started,” Chief Tyrol says to Adama. “The things this ship has been through would have crushed lesser ships.” 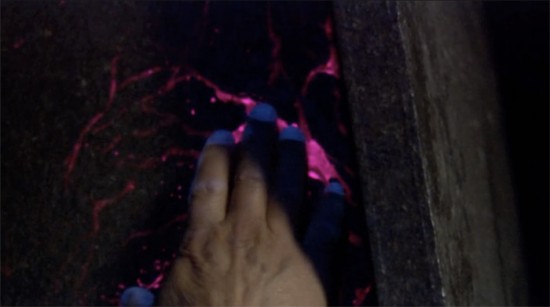 The Galactica survives, but it contains deep structural cracks — both visible and invisible to the naked eye. When existing human technologies prove insufficient for repair, Chief Tyrol suggests the use of a Cylon biocompound — one that will grow and mature with the ship’s infrastructure. Deeply mistrustful of the use of Cylon technology on his human flagship, Adama first denies the recommendation. Tyrol challenges him, asking what “her life” is worth. After examining the ship further and acknowledging cracks within his own abode, Adama — a few drinks in — calls Tyrol. “Do whatever you need to save our girl,” he declares. This decision ultimately allows the ship itself to survive a short number of “jumps” (and half a season) more to get the Galactica’s occupants to a new, inhabitable home.

As James Vaughn notes: “Caring for the buildings, landscapes, and collections are the means but not the ends of the work of historic sites.” And how different is this example of reconsideration of potentially threatening technology use from the potential conflicts debated within institutional environments about new technologies every day? 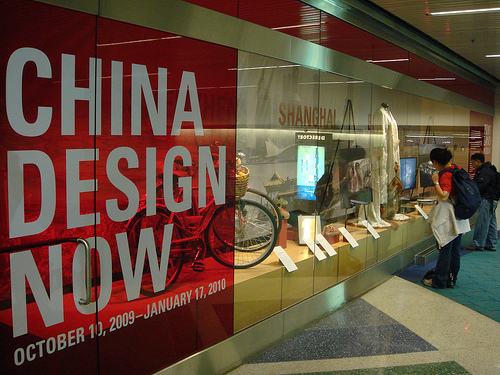 In his article “Four Ways to Keep the Museum Experience Relevant,” Steve McCallion recounted this about the China Design Now exhibit at the Portland Art Museum:

The museum was able to successfully move beyond the traditional museum experience and remain authentic because it understood its core promise — inspiring conversations through art and culture. The medium of social media did not become the museum’s promise, but a means to connect with a new generation of potential patrons. It remained committed to curatorial rigor, the selection of collaborators was strategic, and the topic was timely and meaningful. By staying true to its purpose, the museum was able to be relevant to this new generation without alienating its traditional patrons. An 85-year-old board member said it best: “CDN allowed the museum to rethink how it connects with people.”

Adama knew that the primary purpose of the Galactica was to transport and protect; without taking the risk of using new technology, the ship’s infrastructure would have almost definitively failed. I would never advocate the use of new technology for newness sake, but — as McCallion recounts about his exhibit — new technology utilized with clear, inherent purpose can succeed.

All of these examples, part of the recipe for survival of a grand, old ship, are meant as points for discussion regarding ongoing, pressing issues within the museum community. As this series of articles proceeds, I’ll reference additional examples from the BSG series, as well as other corners of the pop culture world that may or may not typically see the light of day within standard institutional conversations. To be honest, I feel like I have no answers. However, as mythologies have historically shed light on our lives by giving us insight and perspectives through which to see ourselves, perhaps we could utilize our current pop culture mythologies to re-imagine the future of our institutions.