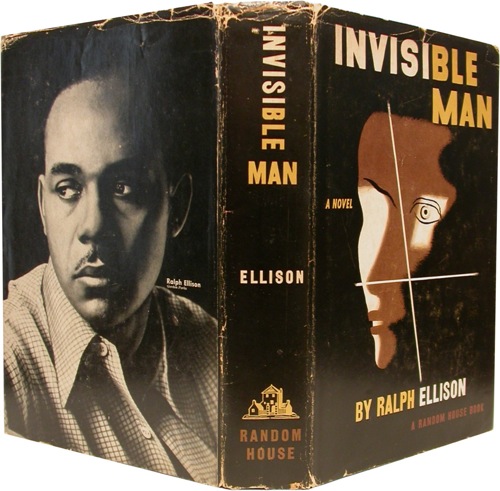 “I stared at the two pairs of shoes before me. Mr. Norton’s were white, trimmed with black. They were custom made and there beside the cheap tan brogues of the farmer they had the elegantly slender well-bred appearance of fine gloves.” — Ralph Ellison, Invisible Man (1952; excerpted in 1947)

[Ninth in an occasional series seeking to determine the make and model of fictional footwear.]

Ralph Ellison’s Invisible Man vacillates between the nameless narrator’s momentary successes and humbling demises. The support of patrons (his scholarship to university, his leadership of the Harlem chapter of the Brotherhood) and the actions of men who have pulled themselves up by their bootstraps (the university president, paint factory engineer, Ras the Destroyer) are woven together, leaving the reader to question who succeeds in propelling the protagonist’s fate forward and who pushes him back.

The above quote describes the intersection of Mr. Norton — a successful, white, Bostonian patron of the narrator’s southern, African-American university — and a disgraced African-American farmer who lives at the edge of the esteemed institution’s town. Norton and the narrator encounter the farmer during a leisurely afternoon drive, during which the narrator unintentionally shows Norton the seedier side of the local community; the university president expels him for this infraction. This meeting, in other words, sets in motion the narrator’s search for his place in society; it also catalyzes the novel’s undulating relationships between success and failure, celebrity and invisibility, white and black.

Though the characters might appear to represent the extremes of the characters whom the narrator will encounter throughout the novel, an investigation into their footwear puts any such absolute dichotomy into question. Ellison specifies only one of the shoe types… but a little research into the history of men’s footwear, the advertising of 1947, and vintage shoe dealers’ websites opens the possibility that the farmer and Mr. Norton may both be wearing… brogues.

According to Joseph Sparkes Hall’s 1847 book, The Book of the Feet: a History of Boots and Shoes, brogues were originally made in a manner different from other footwear; the “brogue-makers pride[d] themselves in the antiquity of their trade; and boast[ed] over shoemakers, whom they consider[ed] a spurious graft on their most noble art.” Sparkes Hall credits the superior craftsmanship of brogues to the artistry of the Irishmen who created foot coverings for everyday use: “They are considered by the country people more durable for field-labor, being less liable to rip in the sewing, than if put together with hemp and wax; and being cheaper than shoes, are in more general use.”

By specifically describing Norton’s shoes as “custom,” Ellison implies that the farmer’s brogues are commonplace and widely available. The largest mail order catalogs of the 1940s included those from Montgomery Ward and Sears, Roebuck and Co. It’s likely, then, that the farmer’s brogues (when new) looked something like this pair — found in a 1947 Montgomery Ward catalog: 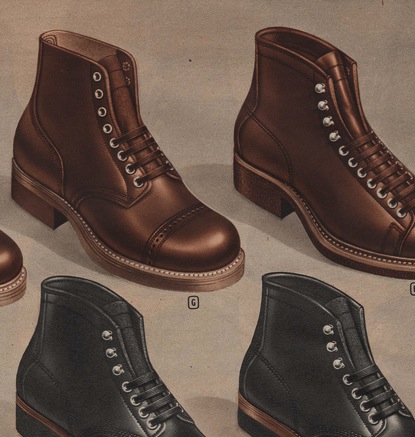 Further supporting this theory, the Montgomery Ward description advertises that these work shoes “resist barnyard acids or moisture.” Brogues evolved from the original Irish farmer shoes, designed for wading through bogs. In his article “Evolution of Brogue Shoes,” John Samuel writes, “The humble Irish workers adored the shoe due to their unique perforated front and tongue-less laces. These were so created so as to aid the workers in being comfortable on the damp bogs of the countryside where they worked. The holes helped drain out water from inside the shoes, if it filled in during the rainy season.”

Though they may have begun as humble farmer’s shoes, brogues appear to have diverged along two different evolutionary branches: the functional, working shoe; and the modern-day wingtip dress shoe. Whose front is also pierced, though the piercing’s function has by now become purely decorative. An ad from LIFE (November 11, 1940) shows upscale brogues: 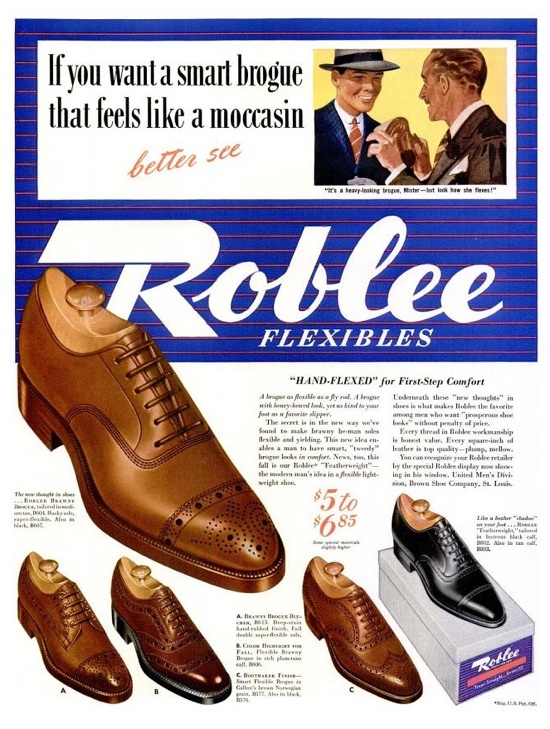 Here’s another ad for upscale brogues, from the November 3, 1947 issue of LIFE:

Perhaps the shoes in these ads aren’t fancy enough for the presumably well-heeled Mr. Norton. Here is a pair of high-end men’s dress shoes, circa 1940, from a vintage shoe dealer’s website: 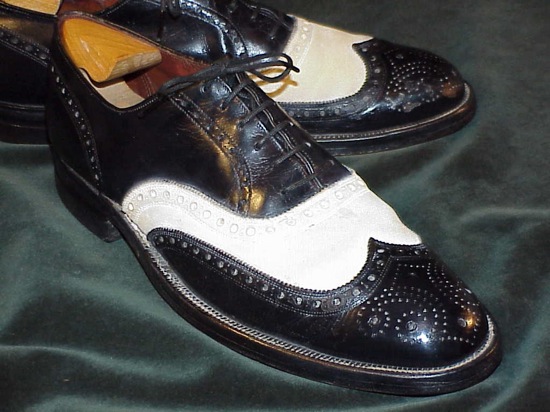 In the passage quoted above, which is one of the only mentions of shoes in Ellison’s novel, the narrator’s two possible futures — one upscale, the other common; one customized for the unique individual, the other mass-produced for the average man — are represented symbolically. But the possibility that both the rich white businessman and the poor African-American farmer are wearing pierced-front brogues might seem to suggest that Ellison isn’t describing two types of human being, in this scene. In fact, their differences are no more than skin- (and shoe-)deep.

NOTE: Some of the photos above come from the Library of Congress’s Flickr photostream.