Introducing a series of posts using Battlestar Galactica as a lens through which to view museums’ challenge to create and retain relevancy within a difficult economic climate. The author leads strategy and digital integration for an exhibit design studio. 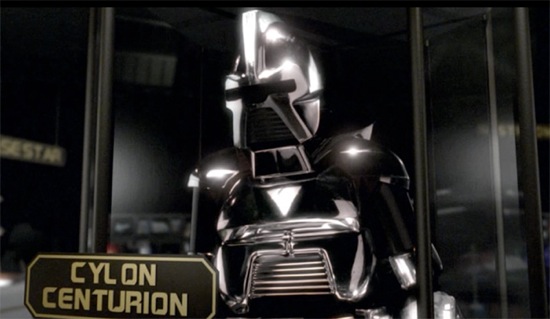 I often recount an abridged version of what follows to colleagues in the museum design community.

In Episode 7 (“The Long Patrol”) of the original 1978 version of Battlestar Galactica, the pilot Starbuck wakes up after a blindsiding assault, and discovers that his state-of-the-art starfighter has been stolen. Exasperated by the antiquity of the vehicle abandoned by his attacker, Starbuck nevertheless takes off in it, grumbling, “This feels like flying a museum.”

In 2003, Ronald D. Moore and David Eick re-imagined (what came to be known as) BSG. When we first see the Galactica itself, in the miniseries that kicks off the series reboot, a government PR representative is giving a tour of the battlestar. Preparations are underway for a decommissioning service that will finalize the changeover of the Galactica from functioning war machine to a museum. It’s been forty years since an active war; the colonial fleet and its associated society believe that the battlestar is now irrelevant. The Galactica is in the midst of significant modification; quick cuts take us from views of a functioning battleship to darkened hangar bays full of starfighter exhibitions. 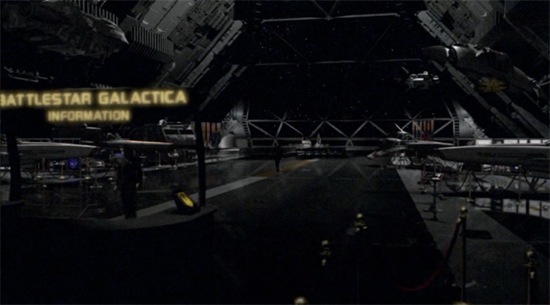 BSG viewers quickly learn that the post-9/11 re-imagined Galactica may prove woefully inadequate to fight a new adversary. Within one of these exhibit views, the camera quickly slides past a possible replica of what is labeled as a Cylon — the humans’ sentient robot creation and war-time enemy. If this is what the Battlestar crew believes they’d be fighting, this image further emphasizes the irrelevance of their knowledge of the times; we’ve just seen, in the opening sequence, that the Cylons now look nothing like this artifact. The Galactica, an aging behemoth, was built to fight the exhibited Cylons — the blocky, robotic ones from the 1978 series. The decommissioning ceremony proceeds as scheduled, with no knowledge of the ominous foreshadowing that the television viewer has seen.

Within the series’ opening sequence, we witness a solitary, seated human representative at a space station in remote neutral territory waiting to meet with a Cylon counterpart. Though — as we’re told through opening titles — the yearly meeting was agreed upon at the armistice that ended the war forty years ago, no Cylon has ever attended. On this day, the door of the meeting room opens to reveal sleek centurion Cylon robots followed by a woman who appears human. “Are you alive?” asks the beautiful creature we later learn is a Cylon model six. “Yes,” replies the human representative. “Prove it,” she states, as she proceeds to kiss the man and we next see the space station explode.

Soon after or possibly concurrent to the decommissioning ceremony, war breaks out. The Cylons stage a synchronized attack on all twelve of the colonies. The assault leaves the planets in nuclear holocaust and destroys nearly all of the battleships and a majority of civilian ships. The military relic that is the Battlestar Galactica must again, nearly instantaneously, return to fully operational, battle-ready life. It simultaneously needs to adapt to a whole new world and war. 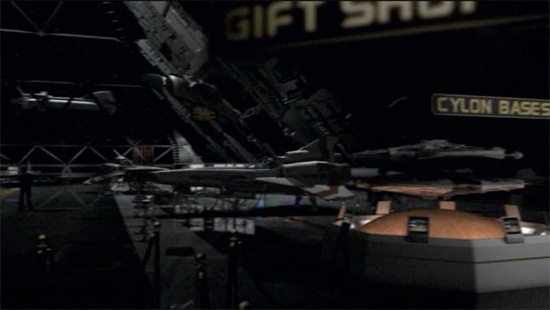 Why do I tell my fellow museum design colleagues this tele-parable? Because the Battlestar Galactica is a behemoth of an institution, built for an earlier age; within the series, this institution has to persevere, and also — due to its war-time circumstances — adapt to new challenges at a rapid pace while serving an increasing number of constituencies. In this time of budget cuts, bankruptcy, and struggles for institutional relevance, I believe museum designers can take inspiration from the Galactica’s struggle to endure. BSG begins with the motif of museum as irrelevant institution and proceeds to turn that institution around — it’s a case study waiting to be explicated. 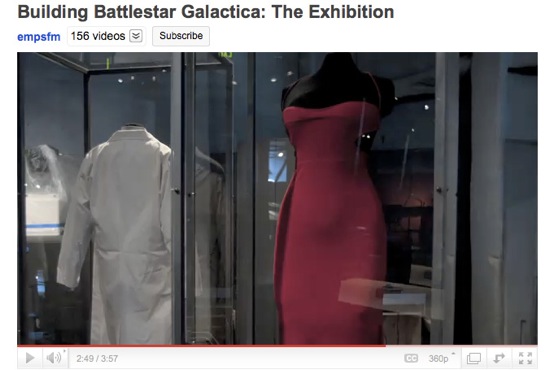 Battlestar Galactica The Exhibition recently finished its run at the Experience Music Project/Science Fiction Museum in Seattle, Washington. An exhibit full of standard fan fare, it nonetheless effortlessly expressed what Battlestar Galactica does best — it asked visitors to question their own views and choices in present society, without explicitly ever saying so. “That sounds like something George W. Bush would say,” a non-BSG-watching colleague with whom I saw the exhibit spontaneously declared in response to label text on Cylons.

The curators were clearly self-conscious of this trope. On the website for the exhibition, they state:

The setting of Battlestar Galactica may be rife with spaceships and inhuman adversaries, but ultimately the show is a complex narrative about how we attempt to retain our humanity under desperate circumstances. The series acts as a science-fictional lens through which to examine difficult questions that we may encounter in our own lives.

Clearly, BSG provides thought-provoking juxtapositions to challenges of the present. 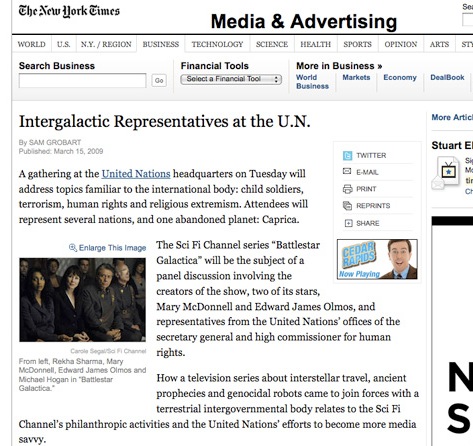 At the time of the series’ 2009 finale, the United Nations held a panel presentation to discuss the show’s relevance to today’s cultural and political challenges. (Due to its extraordinary ability to parallel current events, the series notoriously served as the subject of U.N. water-cooler conversations.) According to the New York Times‘ coverage of the panel:

“The show has been a sort of laboratory for the choices and issues real people in governments are making every day,” said Ms. McDonnell, who plays President Laura Roslin on the program. “I’ve had the chance to meet some of those people,” she added. “Many of them are big fans of the show.”

U.N. delegates may or may not have learned anything explicit from BSG, but they utilized it as a launching point for political discussion. Another 2009 New York Times article explored museums’ struggle to create and retain relevancy while expanding their constituent communities within a difficult economic climate: “Yoga classes and bicycle get-togethers may not be your typical museum fare,” wrote Carol Vogel, “but in these rough economic times, anything goes.”

If museums are willing to try anything, I would suggest that we source relevant inspiration more broadly from the popular culture of our daily lives. In a series of posts published here at HILOBROW, I will use BSG — and later, other popular culture inspirations — as a lens through which to view museum design’s challenges and opportunities.