The Gif is Back

Animated gifs are BACK.

The most meme-worthy manifestation of near-nostalgia is not the pop-up book, nor a camera app, it’s not even the mixtape; it is, of course, the animated gif.

Big in the 90s, when bandwidth issues precluded much online video, animated gifs brought a little movement to the early web, limited only by imagination and a palette of web-safe colors. Animated gifs were necessarily overcompressed and repetitive, and often silly, but allowed a quick dash of motion to spice up otherwise-static webpages.

But today, with ever-increasing bandwidth and improvements in graphics applications, we’re saturated with online video, ranging from sophisticated Hollywood HD trailers to one-minute YouTube pratfalls, with every variety of art film, documentary, music video, animated eye candy, and modal-window advertisement in between. Special cameras like the Flip are sold specifically for the upload. Even the HTML standard itself has been updated to incorporate <video> tags.

So why the gif, and why now?

Like most humor, the animated gif flickers with a sense of uneasiness. On one side we have the accelerating nostalgia of planned obsolescence. As we shift through technologies and cultural poses with ever-greater speed, we don’t have the time we used to, to get used to things. And after a half-century of the Cult of the New, we’re running out of “new.” Old has always been poached for revision and revival. But now it’s the very-near-past that is poached. “Hey, remember 5 minutes ago? Wow, those were some really great times.”

One of the best (and most frantic) examples is the fashion industry. There have been so many neon 80s revivals since the actual 1980s that they are no longer measured by decade, or even year — revivals are measured by individual designers’ seasonal collections. The ironic t-shirt fad of the ‘oughts recycled the emo line illustrations of the 90s. We’re remaking movies, not from our parents’ generation, or even our childhood, but from our own recent experience.

You can certainly see it in cellphone apps, particularly the camera apps, as I’ve written about in HiLobrow previously. Not only do apps like Hipstamatic invoke the ghost of 1970s Kodachrome, they compete with apps like Decim8, which tap into a nostalgia for the digital artifact, or glitch, something that’s still very much alive now. Keeping pace with a “nostalgia for the now” is a nostalgia for past futures, in which the present is unfavorably contrasted with the futures we were supposed to be in by this point.

So animated gifs, we hardly knew ye. And we’re bringing you back to give the relationship another try. But there’s a positive side to this nostalgic turn, as we embrace the unreality in realism.

There has always been a seesaw in art history between realism and artifice. The second coming of the animated gif is a step towards the latter, one that exposes the gap between realism and reality. We’re surrounded by realism, especially in film and video. Not only do we have a seemingly-endless supply of verité moments thanks to YouTube, we are encouraged by a Reality TV culture to document every aspect of our lives. It’s not real unless it’s uploaded and shared; it’s not real unless it’s filmed and copied. Video capability is in every point-and-shoot digital camera, and now in many phones, to say nothing of the special web-friendly video cameras already mentioned. And with the availability of easy editing software like iMovie, and even easier in-camera editing features, proto-auteurs can stitch together pans or work the jump cuts with the best of them. To say nothing of the 24/7 web-cammed lives out there, whose moment, being almost over, is due for a revival right about now. 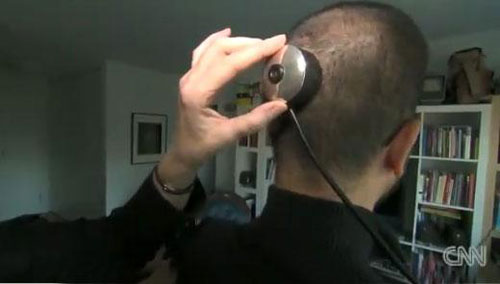 [Wafaa Bilal, Third I, camera-embedded-in-back-of-head project, previously profiled on HiLobrow, and recently removed from the back of his head]

And there’s HD. And 3D! And, inevitably, immersive holograms. And yet. And yet with all this reality, something is missing. Because a copy of reality isn’t reality; it’s art, or at least artifice.

The other day, in a picturesque part of town, I took a few photos with my camera phone. They were ok, pretty much par for the lighting and lens I had. But even had they been perfect, either by capture or by post-image processing, they would have been mediocre, because realism has been so overused by advertising. We are saturated with representations of the real, repurposed to persuade. A pretty scene looks nice until a quick click through Flickr shows hundreds more of the same. A mountain, a spectacular sky, a single silhouetted baobab tree: all already appropriated for motivational posters and ads.

Since the advent of photography and its moving brothers and sisters, in image and in sound, we’ve captured reality and bred it in captivity. And made it so easy that we all have our own private zoo. This is not bad, but it renders the duplication of reality no longer that interesting. What may differentiate any of this, and what is still interesting, is the individual point of view: in other words, artifice, or the artistic gesture. Which in technology means lower-tech (or at least lower-tech-looking) solutions. Ladies and gentlemen, may I reintroduce, the animated gif.

Backing away from video towards the limitations of the animated gif mirrors a parallel movement in language. Second Life, the online “virtual environment,” was a visually-enhanced chatroom. During its heyday a few years ago there was talk of integration with Facebook and other parts of the web. Animated avatars would be our online personas, replacing things like “janedoe@aol.com,” or “199.72.188.22,” which are identifiers that say more about our technologies than ourselves. Profile pictures are a step up, but still static — how much better to have a little person that you can customize to look like you, that can gesture and laugh and “walk around” in cyberspace. The complex UI and navigation of Second Life was daunting, and there were technical holdups involving real-time voice, as well as walled-garden and monetization issues, but still. Here was a 3D-looking web space that looked like a space, not a printed page, and was customizable with both code and graphics tools. People even made movies within the program (see my 2009 OtherZine article, Deus Ex Machinima). This was the future of the web!

But it’s just another a past future now. Usage and popularity of Second Life declined precipitously after its peak, and other, more open-source virtual world offerings failed to gain significant traction. Meanwhile, interest in text-based message boards like Facebook and Twitter surged. The popularity of Twitter is particularly telling; whereas Facebook offers a virtual scrapbook with images and videos viewable without leaving the site, as well as interactive games, Twitter is merely microbursts of written language. It’s hard to imagine a virtual offering that’s more limited than that, and yet we embraced it. We didn’t want little people. We didn’t want to immerse. We didn’t want more realism. Instead, we wanted the gesture, and the gesture we wanted was a sketch. And a sketch contains gaps. We sketch an outline with an asynchronous collection of sentence fragments. We prefer to treat our online image as a concept, rather than a copy.

With this trend, the animated gif keeps good company, with its crude, sketchy, low-resolution quality. Even animated gifs that are drawn from movies and TV (a significant subset of the trend) chop the flow into a few “keyframes,” leaving gaps in the flow, and turning everything into slapstick.

Pratfalls and abrupt motions are the result, not of a graceful animal, but of a crude robot unable to adjust quickly enough to a change in its environment; in other words, us. Slapstick is us acting like a machine; we laugh at the gaps and the hapless repetition. The embedded humor of the animated gif points to the features and limitations of our technologies of art-making, and suggests that those features and limitations may be, ultimately, the same thing.

So — realism? Who needs it? At least for now…

A version of this article first appeared in OtherZine, The San Francisco Journal of Experimental Cinema, Spring 2011