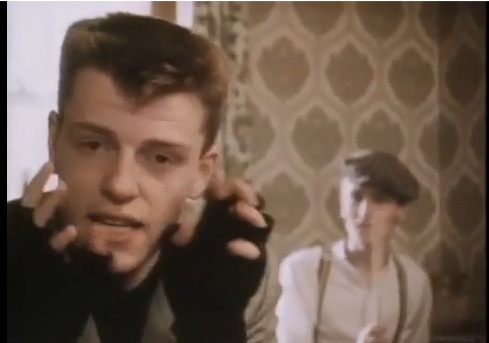 Their U.S. career reduces to “Our House,” but in England, Madness was one of the Eighties’ most successful and adventurous pop acts, and SUGGS (Graham McPherson, born 1961) was their face and voice. (Trumpeter Chas Smash intoned the title of “One Step Beyond.”) Borrowing his sobriquet from a Kentucky-born swing drummer, Suggs’ bulk and blokeishness made him the perfect frontman for the group’s boisterous bluebeat covers. Perhaps too perfect: as the Two-Tone revival’s only all-white outfit, Madness struggled to distance themselves from their early fanbase of Camden Town skinheads. Even as Richard Lester-inspired videos sold them as “The Nutty Boys,” Madness’s music matured, or at least adolesced, setting tales of sexual initiation (“House of Fun”) and unwed motherhood (“Embarassment”) to layered, horn-and-piano-dominated arrangements. Suggs’s man-on-the-street delivery leavened later forays into melancholia (“Tomorrow’s Just Another Day”) and Weller/Bragg-style Red Wedge politics (“Blue Skinned Beast”), though by the anti-apartheid “Waiting For (The Ghost Train),” the strain between style and content had become evident. The Nineties and Oughts found Suggs engaged in a curious range of post-stardom activities, from managing “Madchester” footnotes The Farm to hosting an Italian travel show. But on Madness’s 2009 reunion album The Liberty of Norton Folgate, or in the band’s back-to-ska guise as the Dangermen, he remains what Melody Maker called him in a 1979 live review: “a big lad… who sings.”

On his or her birthday, HiLobrow irregularly pays tribute to one of our high-, low-, no-, or hilobrow heroes. Also born this date: Paul Feyerabend.