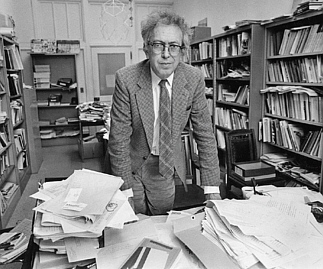 In 1948, twenty-five-year-old HUGH KENNER (1923-2003) took a long drive with Marshall McLuhan from Toronto, where McLuhan had taught Kenner as an undergraduate, to Yale, where Kenner was writing his dissertation on James Joyce. Along the way they stopped at St Elizabeth’s Hospital, in Washington, to meet the mad, treasonous poet Ezra Pound. Pound’s was “the most active mind I have ever experienced,” Kenner later said; “I suddenly knew that I was in the presence of the center of modernism.” Pound told Kenner that he had an “ob-li-ga-tion” to travel and visit the great people of his time, and he did so, becoming a friend and interlocutor of not only Pound, but Samuel Beckett, T.S. Eliot, William Carlos Williams, and even cartoonist Chuck Jones and inventor Buckminster Fuller. (Kenner’s bestselling book wasn’t his literary landmark The Pound Era but Geodesic Math and How to Use It.) McLuhan’s influence on his style was tremendous, but Kenner would always return from sweeping histories to tiny details, individual writers and books and phrases, and above all people. In his last book, The Elsewhere Community (1998), he observes that the Internet, while it could not replace the direct presence of a teacher, “offers something one-on-one presence does not: access to any mentor who has a computer, anywhere in the world. Media always offers gains, though offset by losses.”

On his or her birthday, HiLobrow irregularly pays tribute to one of our high-, low-, no-, or hilobrow heroes. Also born this date: Nicholson Baker.

READ MORE about men and women born on the cusp between the New Gods generation (1914-23) and the Postmodernist generation (1924-33).