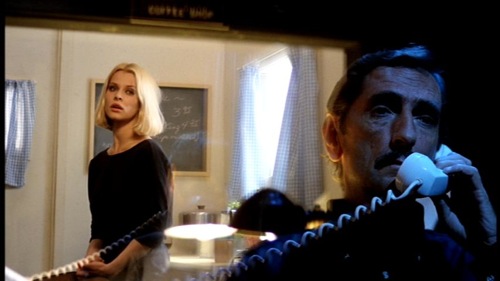 WIM WENDERS (born 1945) was only 16 when Oberhausen, his [and Paul the Octopus’] hometown, hosted its 9th annual festival for short art films, producing what became known as the Oberhausen Manifesto of the Junger Deutscher Film movement. Five years later, Wenders was part of the inaugural class at HFF, the West German Republic’s University for Film and Television in Munich. Three years after that, his Summer in the City was one of the first films made by a director born after the end of World War II. From the beginning, Wenders’s films have been marked by many talented collaborators with distinctive backgrounds and styles, including cinematographers Robbie Muller and Henri Alekan, co-writers Sam Shepard and Peter Handke, musician Ry Cooder, and fellow filmmakers Nicholas Ray, Francis Ford Coppola, Jim Jarmusch, Michaelangelo Antonioni, nearly always as part of an international co-production. Is it any wonder that his output has been uneven? Every cinephile I know is either obsessed with a single Wenders film, or has no use for him. For me, it’s Paris, Texas (1984). Movies like Rain Man and Forrest Gump cribbed whole scenes, nearly turning Harry Dean Stanton’s mute, amnesiac desert wanderer into a cliché, but they’ve never subtracted a fraction of the film’s power. Paris, Texas is the town where Travis was conceived, where he bought a parcel of useless land, and punchline to a cruel joke told by Travis’s father at the expense of his mother. The film conjures one spirit after another, only seen in photographs, film reels, and finally a telephone conversation through a glass wall. Every memory and event re-proves the simultaneous impossibility and inevitability of love, loss, and paternity.