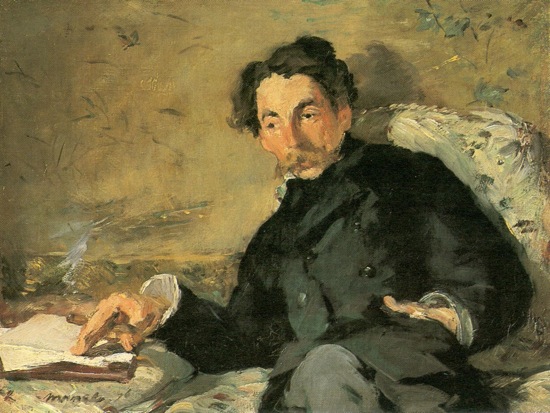 When painter Edgar Degas complained to friends that despite being full of ideas for new poetry, he had struggled all day to write a sonnet, the salon’s host, STÉPHANE MALLARMÉ (1842-98), replied, “But Degas, it is not at all with ideas that one makes poetry. It is with words.” Sound did not follow sense: consider the distortion between language and reality even in the darkened vowels of jour (day) and the bright ones of nuit (night). That was the lesson of Baudelaire and especially Poe, whose verse Mallarmé translated into French prose and to whom Mallarmé dedicated a famous sonnet celebrating the poet’s “black flights of blasphemy” against taste and tradition in his attempts to “give a purer meaning to the words of the tribe.” In time, Mallarmé’s insistence on the elemental role of words led him from sound to space, writing his breathtakingly experimental poem “Un Coup de des” (“A Throw of the dice”) and a series of influential essays calling for a free verse modeled in part on the daily newspaper: the “full sheet on display… [allows for] mass production and circulation, but that advantage is secondary to a miracle, in the highest sense of the word: words led back to their origin, which is the twenty-six letters of the alphabet, so gifted with infinity that they will finally consecrate language.” Many of Mallarmé’s longest projects, including an elaborate combinatorial performance piece alternately called simply Le Livre (The Book) or Le Grand Oeuvre (The Great Work), remained incomplete or in fragments at his death.

On his or her birthday, HiLobrow irregularly pays tribute to one of our high-, low-, no-, or hilobrow heroes. Also born this date: Wilson Pickett.

READ MORE about members of the Original Decadents generation (1834-43).