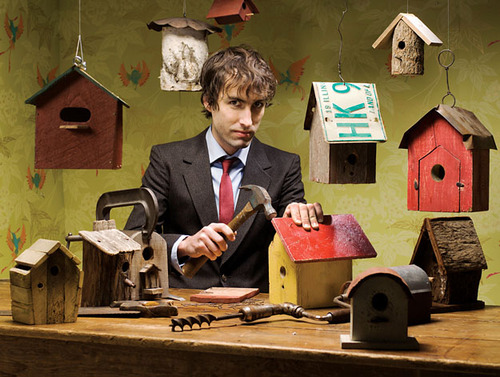 As a guest star on Nick Jr’s “Jack’s Big Music Show,” ANDREW BIRD (born 1973) plays a character called Dr Stringz: “I fix or refurbish / Pretty much care for / Anything that has to do with strings,” he sings, before demonstrating his skills on a guitar, mandolin, violin, and his unmistakable whistle. He doesn’t lay down overlapping tracks on a loop pedal or play the glockenspiel, but otherwise, Dr Stringz’s performance is a fair example of the Andrew Bird live experience. It also showcases the warm, ironic humor, virtuoso musicianship, multisyllabic lyrical flourishes, and classical-minded blend of American pop and roots music that’s helped define this decade’s post-collegiate, NPR-friendly strand of indie rock. After all, Bird’s never been afraid of mashing up childhood references with esoterica: “Dark Matter” probes the secrets of both the soul and the universe by way of Bird’s obsession with the game “Operation”: “With hearts and minds and certain glands / You’ve got to learn to keep a steady hand / And thus began / My morbid fascination.” Or the post-apocalyptic tranquility of “Tables and Chairs,” when we’ll “Throw away our survival kits / Trade butterfly nets for Adderall …/ And there will be snacks.”