Recently Sir Tim Berners-Lee, inventor of the world wide web (not the internet), issued an impassioned plea against digital enclosure. Social networking sites like Facebook (especially Facebook) are creating walled gardens that, by not giving users control of their own data, effectively seal them away from the rest of the internet. And each photo, status update, friend-add and wall post increases one’s investment in the gated community, and provides one less reason to venture outside. Threatened is not only diversity and quirkyness, and anonymous ranting, but the social experiment in democracy that Berners-Lee would see play out across digital space.

Berners-Lee sees digital space less as property to be apportioned and gated, and more as a manifestation of our collective commonwealth of ideas. In this he is both wrong and right. Cyberspace, like all spaces, is both of those things. The question is, which should it be?

Imagine Sir Tim’s extreme displeasure then, should he happen to type “www” into google.com’s search field (instead of into the browser’s address bar, like I did accidentally the other day). We are all now familiar with the “suggested searches” feature, where promoted terms appear as ghostly dropdowns, while the page frantically updates itself below.

I say extreme displeasure, because “www” brings up FACEBOOK.

Google itself is relegated to second place. 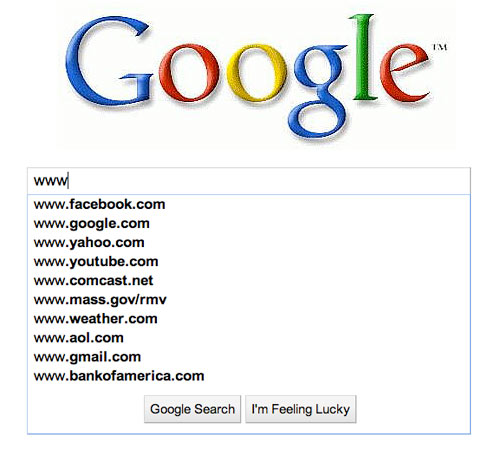 Is this the tragedy of the (cyber)commons? Not yet. But the lines are drawn. It may be time to dust off some phrases from the wild wild west songbook and sing along with Clint, “don’t fence me in.”