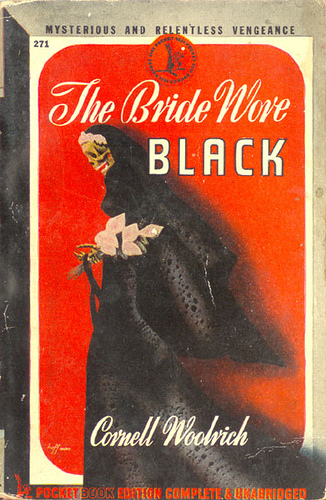 If you know CORNELL WOOLRICH’s (1903-68) oeuvre at all, it’s most likely through the films of the standout directors who’ve interpreted it: Hitchcock’s Rear Window, for example, was based on Woolrich’s story “It Had to Be Murder,” while Truffaut’s The Bride Wore Black jumps off the 1940 novel of the same name. That’s a shame, because his tales of utter, abject doom fuse Hammett’s toughness, Cain’s nihilism, and Chandler’s sense of despair into works that rank up there with his masterful crime-writing colleagues. If love & death motivate the bulk of crime fiction, in Woolrich’s world the stink of one seeps into the promise of the other until the two can no longer be distinguished — as, for example, in I Married a Dead Man (1948), in which a pregnant woman who has attempted to flee a hopeless situation by posing as the widow of, yes, a dead man is blackmailed by an ex-lover. Small wonder, then, that Woolrich spent many of his later years as a near-recluse, living — like another noir master, David Goodis — with his mother.