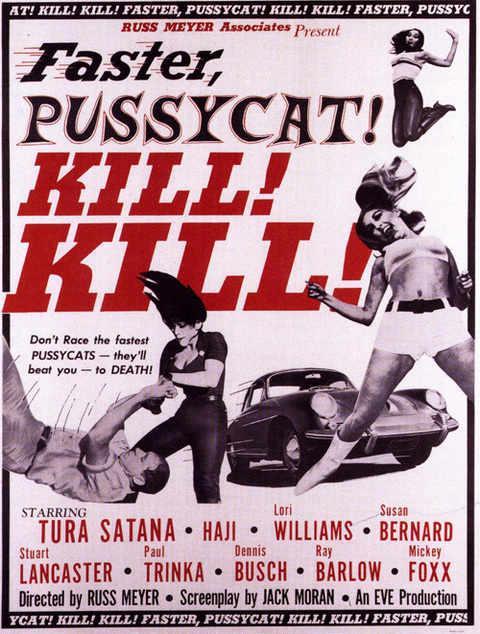 Clad in a leather jumpsuit, tiny waist offset by enormous bosom, her performance in Russ Meyer’s Faster Pussycat! Kill! Kill! (1965) transformed what could have been a run-of-the-mill B-movie into a parable of female power — and sealed her place in the pantheon of pop culture. But the story of TURA SATANA (born 1938) is far more compelling than any low-budget creation. She survived internment at Manzanar, a brutal rape, and a stint in reform school all before her mid-teens. Shortly thereafter Satana made her first appearance on the burlesque stage, where she was frequently billed as “Miss Japan Beautiful.” A chance encounter in Biloxi gave her the opportunity to teach martial arts — and more — to a young Elvis Presley. About her Faster Pussycat role as the man-killing go-go dancer Varla, Satana once remarked that “I took a lot of my anger that had been stored inside of me for many years and let it loose.”

On his or her birthday, HiLobrow irregularly pays tribute to one of our high-, low-, no-, or hilobrow heroes. Also born this date: | Marcel Proust | Nikola Tesla |