VENETIA PHAIR (née Burney), who named the planet Pluto, died on April 30 in Banstead, Surrey. She was 90. 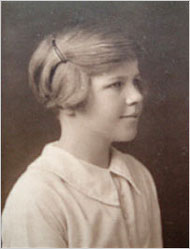 In March 1930, Eleven-year old Venetia was talking to her grandfather, Falconer Madan, about the discovery of the new planet when she proposed naming it after the Roman god of the underworld. Madan was a bibliographer of Lewis Carroll and retired librarian of the Bodleian at Oxford; his brother already had named the twin moons of Mars, Phobos and Deimos, after the war god’s attendants. Madan relayed young Venetia’s notional name to an astronomer friend, who cabled colleagues at the Lowell Observatory in Arizona, where Clyde Tombaugh had recently discovered the planet.

Phair later studied mathematics at Cambridge and married the classicist Maxwell Phair, head of English at Epsom College. Her story is a charming one — the image of her as a child in Oxford, playing at planets in the garden with her mates, puts one in mind of Lyra, protagonist of Phillip Pullman’s His Dark Materials trilogy and the plucky denizen of a parallel Oxford. But her remarkable name — and that of her grandfather — hint at another possible truth: Venetia was an alien, part of a vast trans–solar-system plot to cover up the existence of Earth’s nemesis, the planet Nibiru.

Clyde Tombaugh’s boss was an astronomer named Vesto Melvyn Slipher — who was possessed of another clearly another alien moniker. We hypothesize that Slipher and Phair were Zetas sent to Earth to throw Percival Lowell off the trail of Planet X, which he came close to discovering after his explanation of canals on Mars was thrown into doubt by Alfred Russel Wallace.

Lowell had noticed perturbations in the orbits of the gas giants which led him to speculate the existence of a giant outermost planet, “Planet X” (which we now know is Nibiru, or Wormwood according to St. John the Divine). Pluto? It’s a decoy (its eccentric orbit makes this clear) put in place by the Zetas to hide their existence from us until their planet comes crashing through the inner solar system in 2012, causing a pole reversal and destroying human civilization.

In 2006, Pluto lost its designation as a planet. But by then, of course, the Zetan plot had succeeeded. The orbital perturbations Lowell had observed were discredited in 1992 by an astronomer named Myles Standish. Falconer Madan, Venetia Phair, Vesto Slipher — and now Myles Standish! One thing about the Zetas is clear: they have a flair for names.