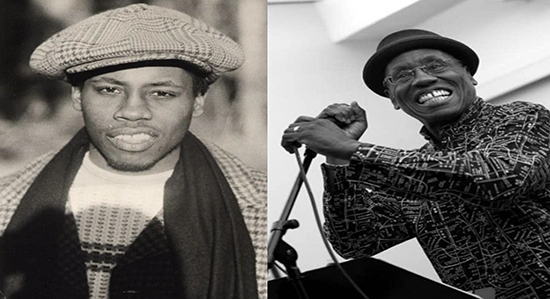 In essence, “I’m tryin’, I’m Tranein’” is my way of saying there’s only one Jimmy Baldwin. One Amiri Baraka. One Sterling Brown. One Gwendolyn Brooks — those are just the B’s, and I’m just “tryin’” to be the best Raymond I can be!

I’m “Tranein’” means I’m enthralled not only with the otherworldly music of the great John Coltrane but also the legendary practice regimen that birthed it. I get up on Toni-time, don my work clothes: faded grey Belichickian hoodie, matching sweatpants, holey socks and my poetic hardhat and steel-toed boots and go to work. I Trane. I teach myself by failing 7 out of 10 times like a Hall of Fame hitter.

I spent several years — wonderful, fabulous years — working for the great Jazz drummer Donald “Duck” Bailey. I was his manager, booker, publicist, promo person, roadie, MC and confidant. I made calls. I booked gigs, penned press releases. I schlepped and set up drums. I greeted guests and I introduced bands. More importantly, I got to hang out with and be mentored by the legendary drummer one or two days every week!

That translated into accompanying him on gigs with some of the most recognized and respected Jazz treasures: Barry Harris, Stanley Cowell, Ernestine Anderson, Cecil Payne, Junior Cook and many, many, many others. Those who know—know… To top that off, I also got to go with him when he visited the likes of Dizzy Gillespie, Max Roach, Art Blakey and Jazz organ master Jimmy Smith. In short, I was able to immerse myself in the world of Jazz weekly for about three years.

I remember constantly being blown away by brilliant performances! I recall greeting the artists with my unbridled enthusiasm. I exclaimed how great their work had been! And I remember — almost to a man— excepting the great Abbey Lincoln, who became a friend; and master “Ms. B.C.” Betty Carter, who always inquired about “Duck”’s marital status — the musicians responded with some variant of, “Thank you, I’m just tryin’ to play this music…” At first I found it strange, insincere or disingenuous. Surely they could see that they’d just blown the roof off the club or concert hall! Obviously they’d ignited five-alarm fires!

It was only later in my tenure with “Duck” that I came to understand the appropriateness of their responses. They knew that that night in New Orleans, Denver, Detroit, Boston, Philly — not to mention Jazz headquarters: NYC — others, known and unknown, had also blown roofs off clubs and concert halls. And ignited their own five-alarm fires. They profoundly understood that while appreciating my appreciation for their dazzling craft, their stellar musicianship, they’d have to hurry home to “shed” — just to keep up. On top of that, they knew how high the bar had been set by Miles, Monk, Mingus and Max — and that’s just the M’s… there’s Charlie Parker, Dizzy Gillespie, Sarah Vaughn, Ella Fitzgerald, Art Tatum — and a list that goes on and on and on…

I grew up surrounded by Jazz. My Mom bought a Jazz album every week. She also bought a bunch of books. I found Jazz icons the most authentic representatives of African-American culture. They had a unique language and style of dress that blended business, pulpit and underworld. It’s the Jazz subculture that most informs my artistic sensibilities. I entered the literary world by chance.

Tommy Lewis, my best friend at the time, was killed by the LAPD along with two other Black Panther Party members, Robert Lawrence and Steve Bartholomew. It was his death that occasioned my first poem. I read it publicly at LACC’s “Breakaway” and was subsequently dubbed “The People’s Poet” by one prominent political activist and BSU leader. There was more where that came from. The sobriquet stuck and grew almost too big for me…

As a nineteen-year-old I opened for the great James Baldwin on an LA Southwest College football field before a crowd of about eight thousand. This event requires a chapter of its own. Lesson #1, at that stage I didn’t understand opening as I do today. As a seasoned adult I once opened for progressive sportswriter Dave Zirin for the launch of his book, What’s My Name, Fool: Sports and Resistance in the United States, sponsored by the Oakland Public Library. I set up my poem “100 Librarians” with an anecdote about my nieces, mentees of Venus and Serena and graduates of Atlanta’s Clark University on tennis scholarships. 3 minutes! I opened for Dave Zirin in 3 minutes. Not so with Baldwin waiting in the wings… I went on and on… Everything I read was greeted by thunderous applause. If they liked that… and so it went. I wish I’d been at the Apollo. The Sandman would have come out and got me off!

There’s more to this story. My Mom was honored with over 130 awards for her community organizing, activism and service. Her awards included everything from plaques and scrolls to two brand new cars. She was one of the founders of both the Charles Drew Postgraduate Medical School and the Martin Luther King, Jr. General Hospital in South Los Angeles. She was also at home when I returned from making my second Baldwin-related faux pas.

After opening for Baldwin on the football field at Southwest, the BSU students invited me to read my poetry at a separate event a week or so later. I arrived with my “entourage” and there were 50–60 students waiting. Unbelievably, I said something to the effect that there weren’t enough people and left! I’m still embarrassed by my egoistic behavior to this day. I was becoming a casualty of my own success.

Thankfully my Mom was there when I returned from this terrible blunder. I recall her compassionate smile saying, “Baby, you always give your best whether there are 2,000 or 2 there…” Karma is a mutha — in 2006 our JazzPoetry ensemble UpSurge! did a six date “mini-tour” of NYC. After two very successful outings at the Bowery Poetry Club in Manhattan and Medgar Evers College in Brooklyn, our next date at a Brooklyn venue, Galapagos, was different. We had the audience of 2 my Mom had foreshadowed. One guest I’d invited — the other was his date. Of course I remembered the 50-60 students I stood up at Southwest. I also heard my Mom’s warm, loving voice in my ear…

Fast forward to everyday life in NYC. One morning I entered the weight room at the gym and a 95-year-old elder said, “You’re the Town Crier!” I find that I’m always “Tryin’, and Tranein’… to live up to “Town Crier” status as I did with that of “People’s Poet”…

[Photos courtesy of the author: Left, a young “People’s Poet” in L.A.; Right, a mature “Town Crier” performing with the JazzPoetry ensemble UpSurge!NYC he co-leads, during a Frederick Douglass Day Celebration at National Writers Union/UAW offices in NYC circa 2018]

“The Town Crier,” Raymond Nat Turner, is a NYC poet privileged to have read at the Harriet Tubman Centennial Symposium. He's Poet-in-Residence at Black Agenda Report and Artistic Director of the stalwart JazzPoetry ensemble, UpSurge!NYC, which has appeared at numerous festivals and venues including the Monterey Jazz Festival and Panafest in Ghana, West Africa.