We have no need of other worlds. We need mirrors. We don’t know what to do with other worlds. A single world, our own, suffices us; but we can’t accept it for what it is.
— Stanisłas Lem, Solaris 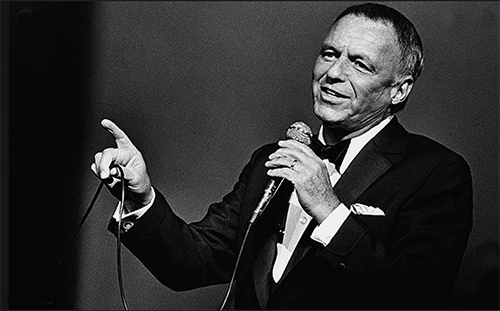 Him being Frank Sinatra, Chairman of the Board and undead midcentury heartthrob, getting yet another “new” “lease” on “life” (he’s already been a hologram) as the latest attempt by nerds to more perfectly inscribe, not Narcissus himself, but his disturbed mirrored reflection.

At this point we’re no stranger to holograms. In addition to Frank, we’ve had Whitney Houston, Tupac, Maria Callas, Elvis (in a Bladerunner sequel), Richard Nixon (covered here previously in Simulacra 8) and recently, improbably, Robert Kardashian. This is to say nothing of the ongoing IRL cosplay of Elvis Impersonators, who now have conventions amongst themselves, showing that the better part of reality may well be just showing up. In a jumpsuit.

Despite most of these being singers, the verisimilitude resides in the visuals, as does the uncanniness. We should also mention the famous 90s “virtual duet” between Natalie Cole (then living) and Nat King Cole (long dead), although singing along to a recorded sample does not quite get us to uncanny. But AI Frank, despite the fact that it’s just The Voice and not a visual, is much closer to the hologram projects. Because that voice is not a recording, but a digital construction of “essential elements” of his voice and performance, verisimilitude again comes to the fore, dragging the uncanny in its wake. One listens more carefully, is something…off? It’s so close, and yet…

OpenAI, the organization behind this attempt, is, as the name implies, open source code for artificial intelligence developers, releasing various components of copies that make up the things and events of our world so that we can all tinker with them. Jukebox is their umbrella for audio. You can make your own Frank! Your own heartthrob! Your own Galatea — of course you will be spending all your time typing code into a computer and not interacting with your creation, as it will not live outside that environment, or even inside it to be honest; but. Still!

The perfect copy of us seems within reach — a copy, that is, so perfect that it will diverge from the original but in believable ways. To be surprised — yes to make the perfect copy, but then have it act in new, i.e., uncopied, ways, that is our question. Perhaps the code you wrote is so complex that you’ve actually forgotten part of what it should do? Is that good enough, or is that more akin to a 4th-grader really trying to still believe in Santa Claus? Or misplacing your glasses on top of your head?

Of course there’s one reliable way these constructed copies can surprise us: by breaking. Not that they break, but how. By making a mistake — by our making a mistake in the code, in the writing of the algorithm, in the assumptions that underlie the writing of same — the expected output is not produced. That is where the surprise always lies. Weird repetitions, nonsensical loops or outputs, full stops and gaps — they’re not the surprises we think we deserve, but they’re the ones we get.

And yet, to return to Frank, or “Frank”, the mistakes are the most real part of this copy. The stream mostly sounds like a Frank Sinatra performance, with familiar inflections, words and phrases, a hint of menace prowling under the tenor, some violins and whatnot, but “Frank” is never so real as when the stream glitches, when a syllable doesn’t resolve into a phrase, when it sounds like the record is skipping in a power surge; in short, when the copy attempt fails, when the reflection is disturbed into a million unrequited ripples. And as the copy of the man fails, the copy of the recorded experience comes to the fore, and takes its rightful place behind the microphone. It sounds like someone’s playing a Sinatra recording a few rooms away, maybe over a radio with the signal fading in and out, or maybe on an old dusty (vinyl) record with a soft needle, jumping and skipping thanks to dust and accumulations.

In short, the audio glitch is not the copy of recorded history, but its very sound: the sound interfered with by the material passage of time; that is to say, interfered with by the materials assembled by the passage of time. Our ear knows how to process this, and relaxes away from its uncanny alertness: this is the sound of the past, reaching to the present, and failing forwards as we pull always further away. That’s reality, that’s where we live! Nothing uncanny here at all.

But it’s worth asking, what is the endgame here, beyond the pat-on-the-head factor, beyond the extraction of new profit streams from once-dead streambeds? Once they — we — finally succeed in building the perfect copy for our ongoing rewrite of history, mythology, ourselves and all the rest of it: what then?

AI Frank on soundcloud: Classic Pop, in the style of Frank Sinatra – Jukebox
Guardian article: The screams of the damned
Jukebox by OpenAI: Jukebox
Walter Benjamin, Theses on the Philosophy of History