This is a test. This is only a test. 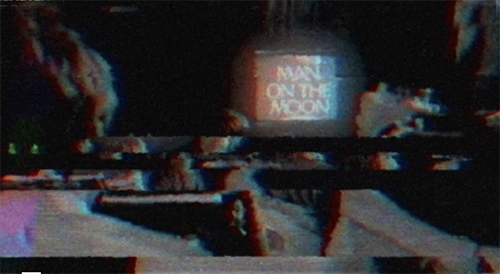 In 1969, Apollo 11 landed on the moon. But what if it had failed to make it? There was no guarantee that the mission could be completed safely, and Richard Nixon had prepared a contingency speech, the Safire Memo, for use in case the rocket crashed.

In 2019, filmmakers Francesca Panetta and Halsey Burgund created a deepfake video and installation to simulate the possible TV broadcast that might have aired should the mission have ended in disaster.

The film is now available on the project website, but the fact that it started its life as an element in an installation emphasizes the importance of context and interpretation for art objects; especially, one might argue, for those using, and tweaking, historical source material.

Panetta and Burgund ended up involving not one but two AIs: one for the visuals, and one for the voice. But it wasn’t just plug’n’play; for verisimilitude, a large amount of manual labor was needed to edit, compress, and add in the appearance of old broadcast and cathode-ray artifacts, all to make it seem not only real, but something real that had happened at a specific point in the history of technologies: the technologies of jet propulsion, and the technologies of communication. 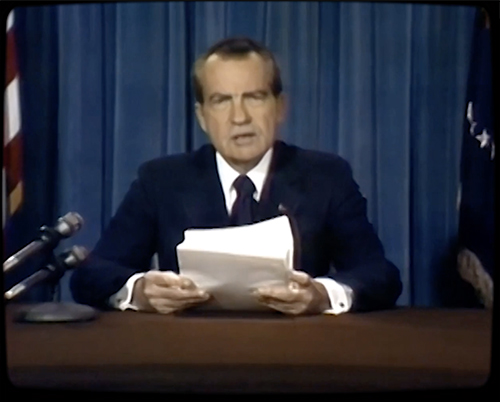 For a visual base, they chose Nixon’s resignation speech. “It has the framing of the flags, a great zoom-in, and Nixon was visually showing emotion.”

For the audio, actor Lewis Wheeler repeated hundreds of phrases and fragments, essentially building a Lego set of sounds which could be assembled by the technology into the eventual presentation. Wheeler also performed the entire speech 20 times, for a database of “mouth movements”. 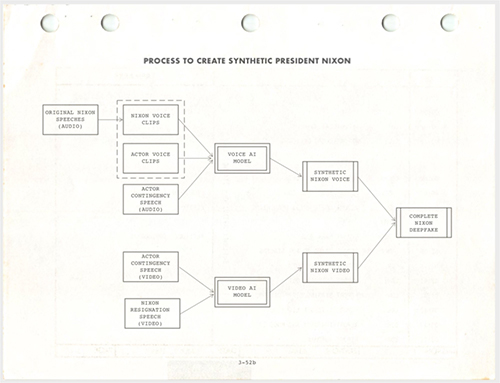 It took three months in total to make our six-minute video. That realization has actually been comforting. Making a high quality deepfake still isn’t easy. However, researchers predict that manipulated images and videos that appear “perfectly real” will be possible for everyday people to create within six months to a year.*

*Although the filmmakers note that simpler, face-swapping videos can be produced much more quickly and cheaply, such as journalist Timothy Lee’s deepfake of Mark Zukerberg as Data from Star Trek.

And Panetta and Burgund’s stated motivation for this project, whose website includes an extensive resources section, is communication. They want not just to shock and awe by tricking the audience, but to educate viewers’ perceptions about deepfakes and how they are made. It is only with this level of transparency that we realistically have a chance of not getting fooled again — because we absolutely will, if we trust the projection and never peek behind the screen.

If someone who experiences our video later recalls the believability of our piece and, as a result, turns a more critical eye on videos they see pop up in their Facebook feed, we will have been successful. 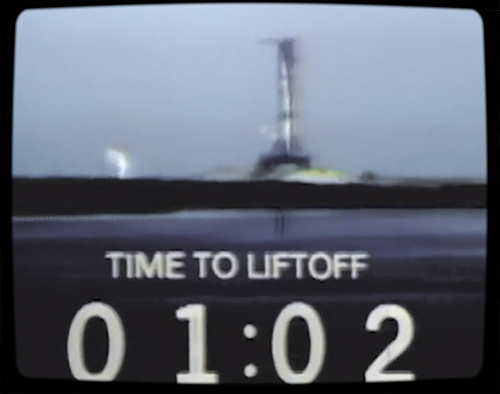 This concludes this test of the Emergency Broadcast Awareness System.

In Event of Moon Disaster: project site, Twitter, Instagram
The Making Of: documentary film by Scientific American
Project premiere: IDFA Doc Lab 2019
Francesca Panetta: website
Halsey Burgund: website
Lewis Wheeler: IMDB
The Safire Memo: PDF from archive.org
The How of it: Why We Made This Deepfake; Explainer
The Why of it: Are Deepfakes Always Sinister or Can Anything Good Come Out of Them?
Debunking of moon conspiracy theories: moondisaster.org; EarthSky.org
Media Literacy in the Age of Disinformation: article