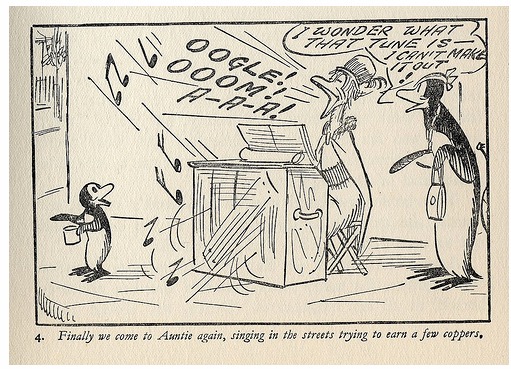 My instrument is easy to play, and I played it for hours on end. People make a fuss at times, but really it is an easy instrument, and if I became especially proficient on it, it was only because it is so easy to play that I played it often. Eventually, for variety, I began to play the instrument in unusual ways; that is, I played different parts of the instrument than are typically used, and I used my body in new ways to play it. These were just small adjustments and inventions I introduced to amuse myself. Joyfully, I played the instrument with my whole body, stamping my feet, clapping my hands. And one day it occurred to me: If I play with my whole body, why do I not sing, too? So I began to sing while I played my instrument. I played, and I stomped and clapped, and I sang as well. But as I sang, I began to think of the words I was singing — these were simple words, both sad and happy ones I had picked up from different lullabies or folksongs I remembered hearing in childhood. The words, though simple, began to affect me. I thought about them more and more often, and they began to take on greater import than I had at first realized. These phrases, taken at random from my memory in the midst of the joy of playing my instrument, began to trouble me. It seemed to me that I had pulled my very memory from my body, and flung it out into the road where I stomped and clapped, disrespectfully dancing across my own thoughts. My mind, emptied of these memories, became obsessed with them. I wanted to re-collect them, stuff them in again and forget them as thoroughly as I had before. But the memories, remembered, wouldn’t go back. They were there every time I played my instrument, emerging from my voice. And as I played constantly, they were constantly there. I began to live only through these memories. My playing took on a dirge-like, mournful tone. People were saddened to hear me play. They crossed the street, or themselves, when they saw me coming — stomping, clapping, and yelling out my memories, the memories that were now forever before my face. Eventually, I could no longer play my instrument, easy as it is, while I sang. Singing was a struggle with my mind, and my body, always content to simply play my instrument, could not manage without my mind. Finally, I lost the ability to play my instrument. I picked it up as often as before, but my body wouldn’t respond. I stood still, clutching my instrument, screaming the phrases that had jumped from the depths of my mind, which had nowhere else to go.

Never, no matter how easy your instrument, begin to sing.