THIS: History in Pieces 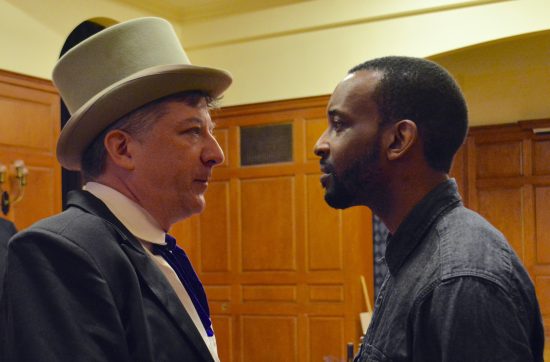 The image of a small band of comrades bookends the alpha and omega of American myth. We imagine intrepid skeleton-crews of colonists taming a conveniently uninhabited land 500 years ago; we envision a handful of last holdouts after nuclear or zombie apocalypses; a microcosm of the few types we feel we need for a satisfactory society — or, at least, for the final settling of scores.

The template of such end-times (or end-of-an-era) dramas now is as much about the shattering and expulsion from personal worlds — suburban safety, uncomplicated adolescence — as it is the end of the external one, stretching from the coming-of-middle-age Big Chill through Blair Witch to the current graphic-novel series on generational rift and worldwide plague The Bunker.

The epic is brought down to digestible human scale in The Iron Heel, and I’ll let the metaphor stand, because the play uses a dining table as the fulcrum around which grand global moments orbit. In the Event of My Death is more of a conventional one-room dramatic setup, the better for inner disorders to play out against this commonplace canvas. 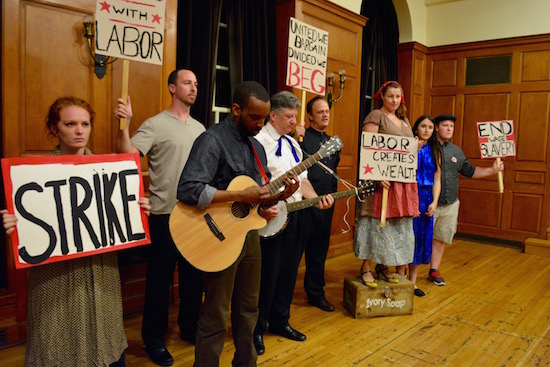 Iron Heel is director/writer Edward Einhorn’s adaptation of red-blooded-adventure novelist Jack London’s dystopian novel from 1908, chronicling centuries of oligarchical control and socialist resistance. Lindsay Joy’s In the Event is a contemporary character-study of a circle of twentysomethings reunited by a high-school friend’s suicide, and bonded by the things that they — and he — left unsaid.

Both dramas are, to twist Kierkegaard’s familiar quote, chronicles of life lived backwards — what really happened in the school crowd’s life and afterlife fills in as grief, animosity and intoxicants resurrect a past that wasn’t shared the first time, and Iron Heel is a retrospective future — we begin after the end, with the novel’s framing device, the introductory essay and frequent footnotes for a manuscript just unearthed after 700 years, cleverly converted by Einhorn to a troupe of re-enactors performing it.

Across the chasm separating youthful preoccupations from mature responsibilities, ten years can seem like a century, and approaching the past as if it were someone else’s story, we often have the impulse to edit and correct it. But where London’s annotator interrupts and competes with long-dead memoirist Avis Everhard’s account, Einhorn’s literal kitchen-table interpreters dialogue with the text, breaking character for explanations or doubts in a kindly satire of Marxist self-criticism. In the Event’s characters have each other for that, challenging former classmates’ accounts of their school years and jabbing at the truth (if not always their own). 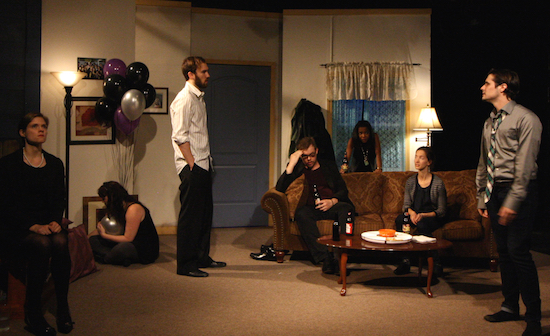 In The Iron Heel, goodness won out (albeit 300 years after the first popular uprisings, which London dates to the period from 1912–32 and the play commemorates); in In the Event, the present is a long aftermath; both occasion soul-searching and each is spurred by death (centered on a single individual — the self-extinguishing friend Freddy and the self-sacrificing revolutionary Ernest Everhard).

One person makes a difference, present or absent. As Ernest in The Iron Heel, Charles J. Ouda is the most compelling prophet I’ve ever seen portrayed, charismatic without conceit in a way seldom witnessed on stage or in reality — professorial, athletic, steadfast and antic, quietly furious and calmly centered; the kind of leader who doesn’t need to indoctrinate you because you want to learn more about them. The contradictions are advised; Ernest is aware of his imperfections and believes in The People as a forest his spark can set ablaze; this will of course leave him burned out, but as he sympathetically tells Avis of the longing for leaders who are always as righteous as their cause, “such men are fantasies” — though as a self-described propagandist (as was London), Ernest understands the aspirational uses of fantasy.

In the role of Avis, a scion of privilege who becomes a rebel leader, Ernest’s life partner and his posthumous evangelist, Victoria Rulle undergoes a phenomenally moving transformation from sheltered, well-intentioned innocent to crusading convert to scarred, clear-eyed movement veteran — especially when giving an eyewitness account of the horrors of a routed revolution, in which we see Avis walking through the carnage while she describes it in her words from years later, an inescapable memory.

Trav SD is malevolently mannered and thunderingly calculated as the oligarch Wickson; a genuinely frightening portrait of America’s self-anointed royalty. As Antonia, the head historian leading the theatrical re-creation, Yvonne Roen is a socialist-poster proletarian divinity come to life, and also reality, determined true-belief in her eyes but humane uncertainties shifting beneath, suppressing the inconsistencies of her heroes but generous in her society’s triumph, referring to the respected figures being honored here as “those who were unlucky enough to be a part of history” — a fierce pillar of gentleness as rare to our eyes as Ernest’s thoughtful embodiment of power. 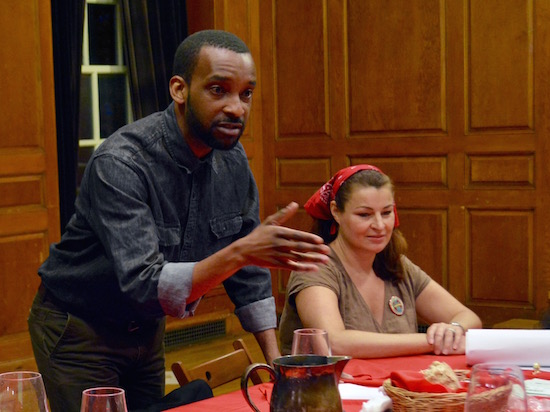 This production recalls, in recent months, Operating Theatre Company’s The Oracle and Mac Rogers’ Universal Robots (and, farther back, the closing scenes of Spielberg & Kubrick’s A.I.) in giving an eerily artifactualized sense of existence; remote pasts reinhabited in distant futures, with we in the middle feeling like we’ve seen a ghost of ourselves. Where the strands of possibility entwine and part in London’s vision is more unsetting than in many such fictions, since he foresaw a sequence of almost-exact historical traumas — WWI & II (merged a bit, with the 1910s conflict provoked by Germany attacking American warships in Hawaii, in December); the stock-market crash; the “1 percent” concept (meticulously phrased as the scourge of “the nine-tenths”); and analogs to the Nazi silencing of academics, the Soviet institutionalizing of dissidents, and the early-21st-century un-busting of the monopolies and buying of democracy.

The best part of the future is that it’s uncertain, and Einhorn leaves open questions that are settled in the novel (like who really plotted a terrorist attack that changed the course of civil liberties), to keep us thinking. And feeling: the book counterpoints Avis’ passion with the later scholar’s analysis, but amidst a cast of characters whose theories make the world turn in one direction or another, this is perhaps Einhorn’s most emotionally immediate work. 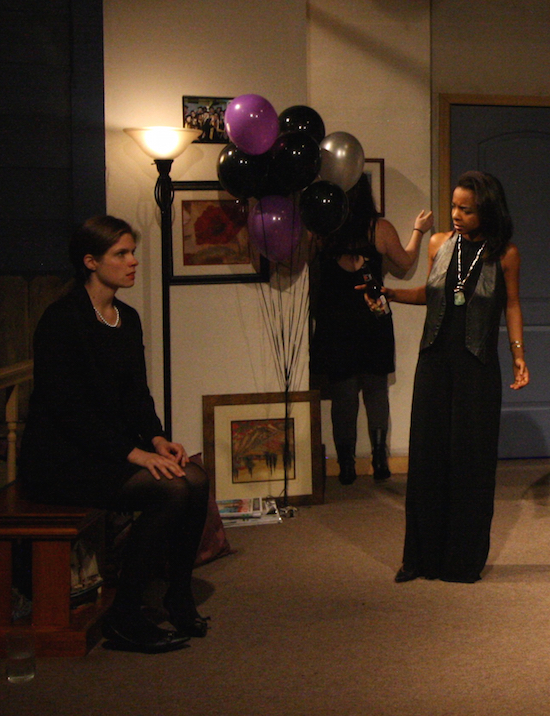 History is made of choices, and emotion is what both drives and crashes them. Of course, the past can change depending on what you don’t know now about what did happen then. In the Event of My Death re-creates a life by belatedly revealing all its details, and makes the recent Aughts feel like a period piece as the characters see that time recede. Friction between official observances and real histories is, in its way, as volatile here as in The Iron Heel’s political drama — we can feel our own life story is stolen from us when a loved one’s loss is locked into prescribed modes of grief.

Away from their friend’s funeral, In the Event’s cast grieve in their own ways — inebriation, jokes, secrets, revelations, accusations. Life insists on itself, and the sincere humor of the play is unconquerable, as its authentic sentiment is irresistible. There’s a mystery I won’t spoil that gives each character a reason to blame each other or themselves for Freddy’s suicide, and the alliances and self-images shift in ways that ring very true — playwright Lindsay Joy has an unerring ear for real people’s defenses, evasions, confessions, regrets and reliefs, and director Padraic Lillis navigates this arena of emotions with great spontaneity and sensitivity (he came through the same territory first-person in his fine monologue/memoir of suicidal leanings, Hope You Get to Eleven, earlier this summer).

Lisa Jill Anderson is magnetic as the often-wasted, intermittently wise Amber; Cory Kosel astonishingly layered, by turns giddy and wounded, as Freddy’s fabulously out, shatteringly bereaved best friend; Breanna Foister tensely dignified and quietly dynamic as a co-worker who didn’t know Freddy in school but may know him better; Lillith Fallon perceptively nuanced and pitifully disciplined as Freddy’s devoutly religious, loving but vengeful older sister; and Kara Young, the moral center of the play, as Freddy’s twin, devastated yet resolute, a performance of extraordinary emotional dimension and natural, distinctive presence.

Sad awarenesses are achieved in each play — granting the audience a viewpoint that might even make us feel lucky to be a part of the future, and look forward to the events of the rest of our lives.

The Iron Heel plays, free or payment-optional, in varying churches, parks and other public venues through Sept. 5, 2016, details here; In the Event of My Death completed its premiere run on August 21, but details (and possible future performances) can be found here.