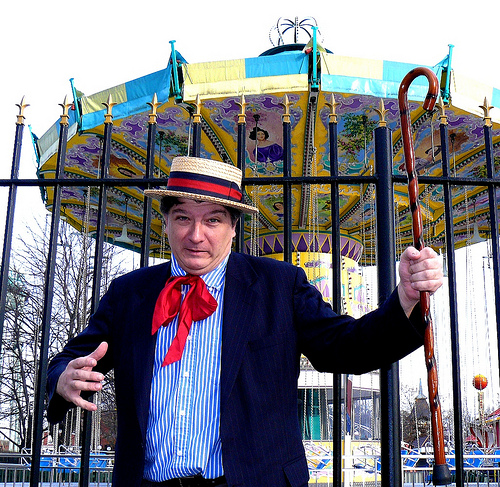 The media moguls of antiquity — and maybe the immediate future — did not command an empire from on high but carried it in a trunk, going straight to the people to sing for their sovereignty. TRAV S.D. (Donald Travis Stewart, born 1965) is a one-man empire of hands-on entertainment, but like all true leaders he doesn’t do it alone. A participant-impresario of neo-Vaudeville, in-person radio plays, exhumed Victorian music-hall, opera-house oration and dime-museum hoodwinkery, “Travesty” takes on his punky burlesque-queen-like alias to absorb the scorn that might be heaped on his master performers in obsolete artforms and creates a secure, expanding home for them in the three-ring tent of his outrageous standup, fabulist storytelling, golden-eared tinpan-alley songwriting and assured but buffoonish thespian personae. The man who wrote The Book That Made Vaudeville Famous and has had, if not a single hand, then a divine one in un-killing it, who connects dots that would leave other scholars Twistered in knots with lectures (and another forthcoming book) on silent-movie shorts and the social-media vids that carry their mantle, this man, I say, walks the talk and treads the boards gracefully as both audacious humorist, inspired scenarist and focused performer in his own right, and presenter of the rafter-shaking crooners, untireable hoofers and daredevil crowd-pleasers — tumblers, jugglers, contortionists — who burned the circuitry for the spectacles of today, and did it in the talent-stage settings that have retaken most of primetime programming. Fluent in the period dialect of every pop subculture from pre-Civil War variety-show to backwoods fable to flower-power psychofarce to atomic-age kitsch, and indulgent of all the eccentricities that make it worth not being someone else, Trav is the heir to the old weird America and the father of a misfit nation that will endure, and where anyone can belong.

On his or her birthday, HiLobrow irregularly pays tribute to one of our high-, low-, no-, or hilobrow heroes. Also born this date: Dorothy Day and Parker Posey.