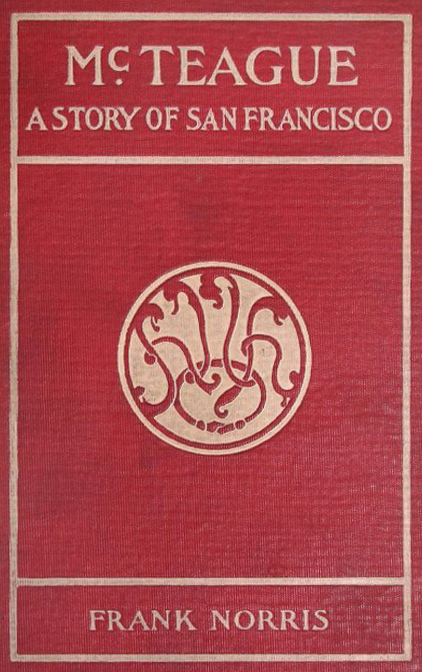 In the spring of 1900, FRANK NORRIS (1870–1902), then working as an editorial reader for Doubleday, Page & Co., strongly recommended for publication a manuscript, Sister Carrie, by journalist and first-time novelist Theodore Dreiser. For this judgment alone, Norris would be a notable figure in American literature, though his support for Dreiser continued, even after Doubleday grew timid and effectively suppressed their own book. Norris’s empathy was great, however, for he was a writer too and his debut novel, McTeague, published by Doubleday & McClure the previous February, was itself a startling, powerful story of ambition and decay many denounced as “lurid.” The Brooklyn Daily Eagle reviewer was more sagacious: “It is a picture of low life in San Francisco — coarse, brutal, sordid, bestial, but painted with marvelous vividness and truth to human nature.” McTeague, we now know, was also the pre-eminent work of American dental fiction until Philip Roth’s The Counterlife (1986) and Norris’ other major novels, The Octopus (1901) and The Pit (1902), both best-sellers, were similarly prophetic, suggesting much later Dreiser, Dos Passos, Steinbeck. On October 25, 1902, three days after entering a San Francisco hospital in anguish, a burst appendix brought Norris into the afterlife: great mourning, collected works and two film versions of McTeague followed: one, Life’s Whirpool (1916), inconsequential; the other, Erich Von Stroheim’s monumental Greed. “The characters are ugly, the settings, the very lives…” opined “photoplay” critic Martin B. Dickstein in December 1924. “One of the most fascinating movies ever produced.”

On his or her birthday, HiLobrow irregularly pays tribute to one of our high-, low-, no-, or hilobrow heroes. Also born this date: Rosa Luxemburg, Heiter Villa Lobos, Mark E. Smith.