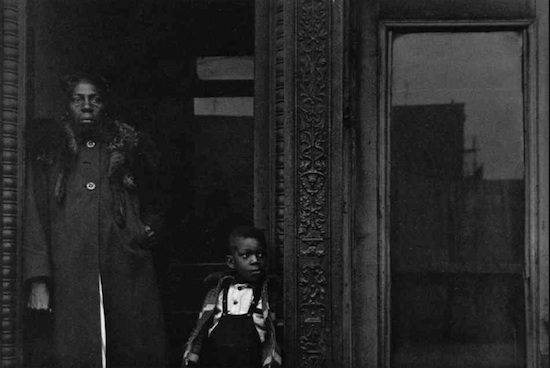 The photography of ROY DECARAVA (1919–2009) astonishes in its blackness, nuance and poetry. Growing up poor in Harlem with his Jamaican mother, DeCarava earned a scholarship to Cooper Union and, in 1940, won a National Tuberculosis Association-sponsored design contest. Drafted in 1942, his segregated Army career was brief: racism, breakdown, hospitalization, medical discharge. Though already an accomplished printmaker, by 1947, DeCarava — inspired by Richard Wright’s 12 Million Black Voices (1941) — switched to camerawork, the fullness of black humanity in available light his primary subject. DeCarava would be celebrated but not before a February 1951 headline akin to some future Philip Roth hysteria: “Marries Negro, Judge Takes Child; Grandma Injects Red Issue.” DeCarava, having wed Anne Strasser, an alleged Communist, her mother, Mrs. Hyman Portnoy of the Bronx, had sued for custody of Anne’s then five-year-old daughter from a previous marriage. Traumas ensued but triumphs too, including the Langston Hughes collaboration, The Sweet Flypaper of Life (1955) and the cover of Miles Davis’ Porgy & Bess (1958). Opening at the Studio Museum in Harlem in September 1968, DeCarava’s “Thru Black Eyes” exhibition was rapturously received but underseen. Remarried to Brooklyn artist Sherry Turner, subsequent decades brought DeCarava much overdue acclaim, culminating in two supreme collections: The Sound I Saw (1981, expanded edition 2001), and Roy DeCarava: A Retrospective (1996). “Black people are constantly being brutally molested with a distorted view of ourselves,” DeCarava once explained. “We must get to the painting of ourselves, our history… and not be penalized for our Black sensitivity.”

On his or her birthday, HiLobrow irregularly pays tribute to one of our high-, low-, no-, or hilobrow heroes. Also born this date: Redd Foxx, Grace Murray Hopper, John Cassavetes.