Imagine paint brushes displaced by an abacus, canvas saturated like graph paper with x/y coordinates, a palette covered in equations, algorithms, prime number tables and the like (a visual universe ruled by the laws of the rectilinear grid, tessellations of the Euclidean plane guiding your mesmerized eye) and you enter the semiotic domain of JUAN GRIS (José Victoriano (Carmelo Carlos) González-Pérez, 1887–1927). Born in Madrid, Gris spent most of his life hanging in Paris with the likes of Picasso and Braque; however, though his work unfolds with the same scheming as theirs, his is more precise. In his 1925 painting “The Painter’s Window,” which in some ways is an augury of the slick, clever surrealism (think Magritte, and — though she would hate this, Frida Kahlo) that would come to dominate the 20th century, especially in Europe, the Cubist allure of the three-dimensional and the hyperreal is displaced as the artist embraces two-dimensional space and rigid, alienating perspectives. Lush, sensual colors offer some respite from from Gris’s symphony of hard angles and rigid lines. It’s his signature painting, and also his greatest self-portrait. 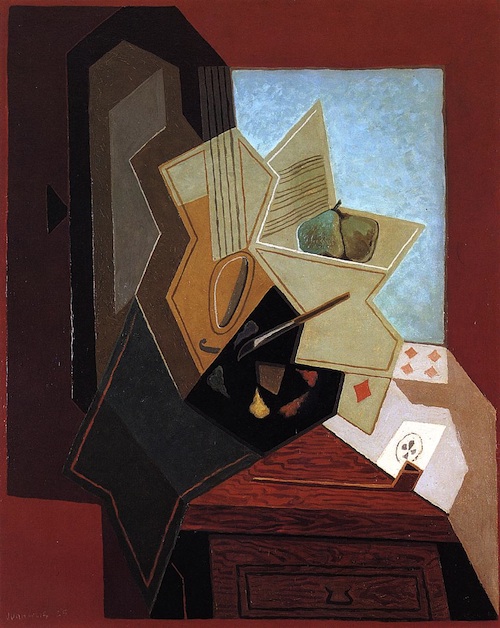 On his or her birthday, HiLobrow irregularly pays tribute to one of our high-, low-, no-, or hilobrow heroes. Also born this date: David Milch, Emmy Noether, Erich Fromm.