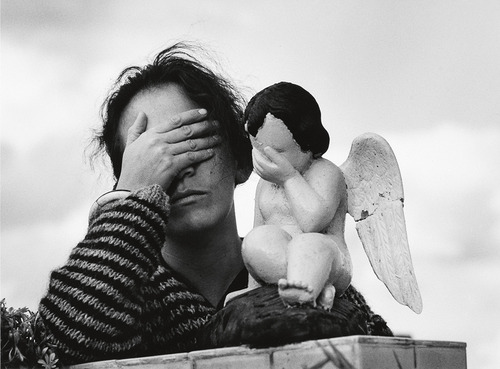 ﻿﻿When you learn your craft in a semiotic factory (think Warhol not Ford) run by Manuel Alvarez Bravo, when you grow up in Mexico City but then spend years of your life chronicling the Mexican indigenous outlands (fantastic worlds filled with life, history, and violence, visible and invisible), and when your medium is a camera, wonderful things can happen. Enter the world of FLOR GARDUÑO’s (born 1957) photography and you find yourself falling into a world of allegory and stark juxtaposition. In her 1987 Self-Portrait, above, Garduño’s wit shines through the photographic plate; subject and object, eyes covered, petition the watchful gaze of the viewer in an act of art that reveals nothing and everything. Her 2001 photo Eden, Switzerland (Eden, Suiza) is a parable unfolding through the figures of an obscured indigenous woman and a non-obscured light-skinned woman. The viewer is here brought into conversation with a tale that includes the photographer herself — who has made a high art career capturing the semiotic pelts of the indigenous bodies of Mexico. (Garduño’s white models are often named, in her photos’ titles, while the unnamed autochthonous figures, descendents of Cuahtemoc, the Maya, and more go unchristened.) Garduño continues to stage, witness, and capture images that are typical of Mexico’s 21st century reality — a nation haunted by the past and clinging to notions of the future suffused with the architecture of dreams. 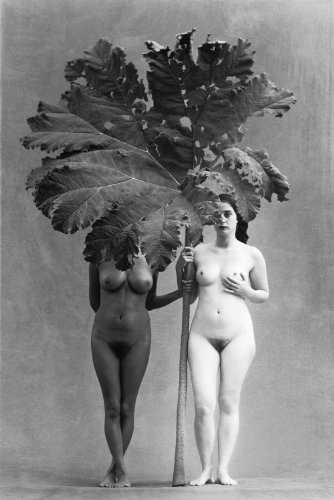 On his or her birthday, HiLobrow irregularly pays tribute to one of our high-, low-, no-, or hilobrow heroes. Also born this date: Margaret Mahy, Thomas Frank, John Prendergast, Russ Meyer, Slavoj Žižek.