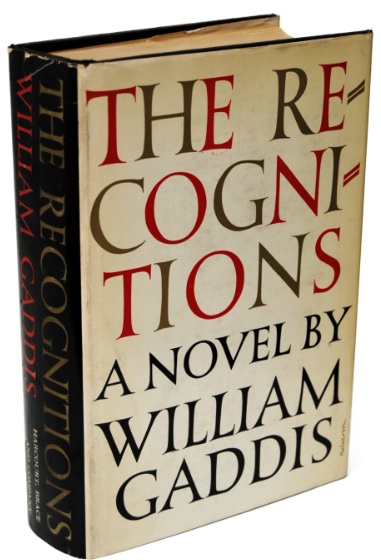 In March 1955, its author having published but 900 words of non-fiction (“Stop Player. Joke No. 4,” about player pianos, for Atlantic Monthly) and twelve pages of fiction (“Les Chemins Des Anes,” in New World Writing) since leaving Harvard a decade earlier, Harcourt, Brace and Company published the 956-page debut novel of WILLIAM GADDIS (1922–98), The Recognitions. It weighed nearly 2 1/2 pounds, cost $7.50 and literary scholar Stuart Gilbert’s back cover blurb suggested T.S. Eliot and James Joyce as forebears. This was perhaps misleading — among the modernists, Wyndham Lewis seems most apposite — but, regardless, no single author exactly prefigures Gaddis’ obsessions (Christian theology, art, authenticity), characters (especially Esme, closely modeled on real-life Greenwich Village muse, Sheri Martinell) or comic genius. Still, it was a Joyce mention in The New Yorker’s brief, condescending review that caught 27-year-old Manhattan actuary Christopher Carlisle Reid’s attention: “mulish i figured a book could fall short of ulysses & still be pretty good so I got it.” Thus Reid writing as “Jack Green” for newspaper, the mimeographed, all lower-case, eccentrically punctuated, broadside he began publishing in 1957. Green was a beatnik and freelance proofreader now; The Recognitions a recognized flop (no second printing, no paperback), a failure he blamed not on the reading public but — as newspaper would savagely, and hilariously explicate — the doltishness, sloth and arrogance of nearly all but two of the book’s fifty-five reviewers, including the New York Post’s Dawn Powell and The Nation’s John Berger. Green’s “constructive suggestion: fire the bastards!”

On his or her birthday, HiLobrow irregularly pays tribute to one of our high-, low-, no-, or hilobrow heroes. Also born this date: Marianne Faithfull.