I’m sitting in a small dark office in the basement of a large warehouse near Paddington station in London. The room smells faintly of oil and strongly of wood polish, tobacco, and lavender. There is a soft ticking from a clock on the desk. To get here I walked past life-sized casts of two dead bodies and a postcard presented David-Lynch-style: under glass in the middle of a vast, empty, smoke filled ballroom with a checkered floor. As far as I can tell I’m alone, and there is an ominous drone and swell of strings from the ambient soundtrack just outside. Because of this I think I should probably feel a bit of anxiety but the room reminds me of my late grandfather’s den from my childhood summers. It’s pleasant and masculine and comforting if a little dark, and I’m relaxed as I sit down in the leather desk chair and start to explore the drawers. 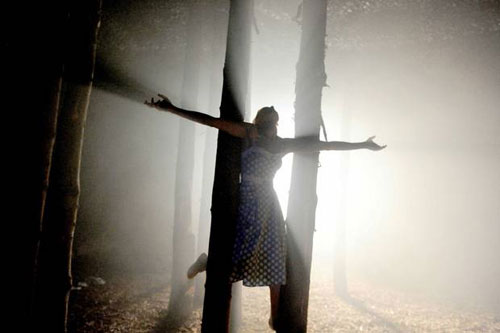 This is The Drowned Man, my third Punchdrunk experience in three different locations (the first in Brookline, MA and the second in New York – both productions of Sleep No More, an adaptation of Shakespeare’s Macbeth.).

I should tell you that if you’ve never been to a Punchdrunk show and think you might, you should stop reading immediately after this paragraph. I mean this.

The show works far better when completely unexpected and I offer only this advice: 1. Wear contact lenses if you need them for your vision – the show requires you wear a mask for the duration, which works over glasses but is uncomfortable. 2: Get deliberately lost, open every door, go where the crowd isn’t. You will not regret this.

Novelty is a huge part of the Punchdrunk experience. After the first Brookline show, I was dazzled, and I excitedly relayed my experience to anyone who would listen. I got used to the bemused expression on people’s faces as I babbled on about bloody doorknobs and bathtubs full of live eels. I must have sounded a bit silly but the enthusiasm was entirely genuine: I felt transported and immersed and every other word that theatre claims to want but rarely achieves.

By the time I saw the show in NYC, the novelty had worn off and I found the experience a bit of a letdown. Whereas in Brookline I had been taken utterly outside my own head, in NY I found myself looking for the edges of the production, the guiding cues, the hidden speakers, the times when the guys in the black masks herded people out of rooms. And here’s the problem: I found them. In NY I stalked a character, only to have him hiss “I’m not in the show, really not… I’m a bartender… go away….” before he dragged a bag of ice through a fire door. Twice I tried to go off and explore only to be blocked by a black-mask, and not in the subtle way that made the Brookline show feel like ritual, but more like I’d just tried (and failed) to sneak past the bulk of a polite but serious Brooklyn bouncer. In NYC the illusion melted at the edges. I felt corralled, not guided.

I don’t mean to say that Sleep No More isn’t worth seeing: it’s a great show with a lot of attention paid to the details. You should go most especially if you’ve never had the Punchdrunk experience and you care about theatre (I suspect this is the first of many shows in this genre), but you should also know that it’s a blockbuster intended for large audiences paying high ticket prices. The details are gorgeous but the props seem more permanently attached and worn in the way of a museum: there is less sense of danger and possibility and more staging. Whereas in Brookline I felt like a ghost who was allowed to slip sideways into an open-ended alternate reality, in NYC I felt like an audience.

These were the thoughts running through my head as I sat in that old chair in the basement den in London, about 30 minutes into the show, when I was surprised by a petit woman in a summer dress who breezed into the space silently and lightly touched my shoulder. She climbed onto the desk and gently removed a cork board from the wall to reveal a mans gold watch hidden there. I realized then the ticking sound I thought was from a clock was much too loud. Stepping down from the desk, the woman turned to me and gently pulled back my sleeve, fitting the watch around my wrist and performing a ritual with crushed lavender. Apparently satisfied, she slipping her soft warm hand into mine and lead me briskly out of the room.

What followed was an elaborate scene which integrated me into the performance itself: we moved rapidly through several sets, trailed now by other audience members. I was taken to a dressing room and seated again, and the watch was transferred to a silver box. My companion had me carry the box for her as we approached another scene from behind, the two of us (and our own small audience) observing a crowd watching the shooting of a film in which the two stars of Temple Studio (the site of the The Drowned Man story) are dancing in a field of snow. My companion took the box and used the shiny surface to dazzle the eyes of one performer, a calculated act of pique or jealousy or revenge that only I seemed to see. Eventually the watch found its way onto the wrist of the leading man and the scene dissolved as if nothing had happened. A play within a play within a play within a play, and in spite of the obvious fictions, I couldn’t help wondering if the actor who was wearing my watch thought about why the metal against his skin was so warm.

The experience felt intensely intimate and from that moment I went from observer to participant in spite of my previous thoughts. I felt complicit, bound to the moment. As it turns out I am hardly alone in this and this is precisely why The Drowned Man is worth your time. An easy criticism of the show would be that it’s more of the Punchdrunk same (and it is). If you are familiar with the Sleep No More, for example, you will find a different story with the same aesthetic and visual language: You will begin in an elevator. You will receive the same mask and instructions. You will come across witches and bathtubs and crypto-catholic occult rooms, and medical supplies and dark ambient drone sounds. You will smell mothballs and leather and oil and rose. You will flip through the same old books in blackletter German and you’ll discover roomfuls of taxidermy. I would describe The Drowned Man as a refinement of a particular style and aesthetic and not a major change in direction; but it is a beautiful refinement.

If you are looking for anything like a traditional theatre experience you will probably be unimpressed. The story, while present, is abstract and unclear, even after having read the synopsis of the source material and the backstory card you are given at the door. In all probability the story would reveal itself through subsequent visits (another reviewer estimated that on any one night a single visitor will only see about 30% of the show). There is little dialog and when it is delivered it feels a bit jarring. Still, what the production lacks in main plot it makes up for in spades with atmosphere, eerie sideplots, exquisite detail and an intense physicality. While all three Punchdrunk productions I’ve seen have featured dance fighting (and dance sex) this show did it particularly well, with the actors routinely hanging horizontally in stairways, pirouetting around tree trunks (off the ground) and hoisting themselves in and around vehicles of all types. One of the friends I attended the show with (it was her first Punchdrunk event) said that she felt she understood the show once she had decided it was a dance piece.

Approaching the end of the show, tired from a long night of walking, face a bit sore from the mask (I forgot my contacts), I walked into a stairwell, contemplating hitting the bar (all Punchdrunk productions feature a bar where patrons can remove their masks, talk to one another and imbibe a cocktail or two). At that moment a ghostly starlet I hadn’t seen before slipped her arm around me and handed me a rose. We walked together out through a forest, past an abandoned party tent and towards where a large crowed were watching two characters dancing an elaborate duet. My new friend nuzzled against my shoulder and held me close as we watched one character brutally murder another: a knife glinted in the light and blood spurted from his stomach and across the forest floor, pooling at the bottom of the hill where they stood. At the moment of death the lights changed and a voice from the sky yelled “CUT… that’s a wrap.” One spell broken, my new friend gave me a quick hug and gestured that I should toss the rose in gratitude for the performance. She then looked in my eyes, thanking me with a smile and a slight bow before vanishing into the audience around me, which was now filled with cast members as the scene evolved into a cast party complete with a curtain call. In The Drowned Man the edges were all there: the walls all false, the characters all actors, the objects all props, but deftly woven into the fiction itself. As I followed the crowd to the bar I realized that it was located on the one “soundstage” that I hadn’t been able to access, only able to peer at through the cracks of doors nailed shut, listening to the sounds of life I had thought were just another part of the performance.