Total Eclipse of the Self

In late 2001, Soft Cell’s Marc Almond appeared with Rosenstolz on Eurovision as the guest musical artists. They performed a cover of the Klaus Nomi song Total Eclipse of the Sun.

This video is an incredible layer of schmaltz with bizarre overtones. And it’s not clear in the least who, exactly, this performance is for. Does the glowstick-waving audience know the history of the song? Does AnNa R. know? She seems to be enjoying herself but it’s unclear this is an homage. Nor does the keyboardist who leaves his Korg-pounding perch to egg the audience along (sit harder! wave faster!) seem to posses an ounce of irony.

Does Almond understand? By the time the flames start you’re left wondering if this was all orchestrated by the post-Church-of-Satan singer (who sports a ginormous gold cross to offset his platinum hair). My favorite part of this video occurs near the very end (4:04). AnNa is lost in theatrical drama and Almond sneaks an… eyeroll? A look around?  A grimace plays across his lips. He knows, or thinks he knows. 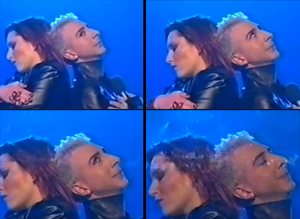 last dance,
let the entire cast dance,
do the dismembered blast dance
as we get atomized

By the time of this performance, the song’s original performer Klaus Nomi had been dead of AIDS for 18 years, passing away at age 39, one year after Almond’s cover of Gloria Jones’ 1965 Tainted Love hit number one on the UK pop charts. Watching Klaus himself perform his song is striking because: 1. It’s absolutely, unequivocally, technically better. And 2: It is far more beautiful.

But Nomi didn’t write Total Eclipse, Kristian Hoffman did, and in this performance you see Nomi wearing his signature plastic tuxedo, a look borrowed from David Bowie, for whom Nomi sang backup during Bowie’s appearance on Saturday Night Live. 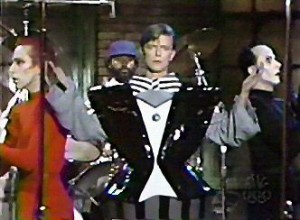 Arguably Almond and Nomi borrowed from the same new-wave-glam-rock-punk-80s meilieu, but clearly they are different people operating in a different universe. Almond’s smirk says it all, while Nomi’s expression, even under the layers of kabuki makeup, remains refreshingly honest. There is no deception here. The mask is the man.

Nomi never mocked his audience, he simply performed and you were free to watch and laugh, or rejoice, or both. Professional boor Rush Limbaugh uses Nomi’s cover of Lesley Gore’s 1964 You Don’t Own Me as the theme music for his “Gay Update” (a selection I like to believe was slipped in by a surly intern or music director. Surely Limbaugh isn’t clever or erudite to catch the reference?) Nomi’s version is sung as much for his audience as it is for an imaginary partner, and as a perfect counterpoint to his Nomi Song (both songs released the same year). Limbaugh may be poking fun, but it is Nomi (or the imp of the perverse) that gets the last laugh and always will.

Artist are nothing without their communities. The best of us borrow freely, the worst of us scream originality as a banner of quality (the bottom of the barrel enforce this by strong-arming each other with takedown notices). But value is not about authenticity or even originality, it’s about engagement with the audience. Almond does not engage the actual audience on Eurovision. At best, he engages me, ten years late, watching this performance and bemused at the eye roll. But Nomi’s engagement with his audience was far more immediate and let’s say it: democratic. Nomi refused to pass, his role was never aggressive or even subversive, but playful and direct. Nomi is Nomi. Take it or leave it. But if you do take it, you welcome and acknowledge yourself into a particular club, mark yourself as a freak, a Nomi-lover. This step requires that you own your Self and the performance of it so completely that the makeup becomes permanent – the nafs is at peace.