As an undergraduate I moved to Chicago and spent the better part of four years living in Art Institute housing, probably the most expensive real-estate I will ever occupy. Not owning a car, my home at the zero/zero point of the city grid, I traveled almost exclusively by train.

Chicago has a strange relationship to nature and an even odder relationship to technology. This is the home of the world’s tallest load bearing proto-skyscraper (whose walls are 7ft thick at the base – A building so heavy it sank.)  It is a city that reversed its own rivers. It is a city that built a subway above ground, raised the downtown so ground level became under and even then, did in fact posses an extensive underground network of small-gauge train tunnels. These low-slung arched passages dug by hand through clay were commercialized, abandoned and eventually sealed after being implicated in massive downtown flooding in the early 1990s. (The floods were caused by scrappers’ removal of watertight doors, an act overlooked until a leak sprung under the riverbed, emptying an endless supply of dirty backwards-flowing water into the basements of the Magnificent Mile.) 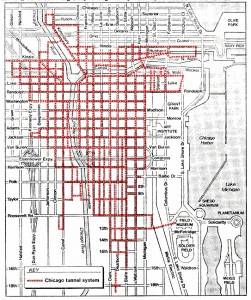 Perched high above the false-floor-road in my tiny loft apartment with its beautiful windows, I felt far from Chicago’s unnatural unease until the day that I went for a long pensive walk along the shoreline of lake Michigan. I was searching for a rock. I couldn’t find one. I walked more than seven miles that day, along the coast and back, searching for a single stone. But while Chicago has paved and concrete streets, sidewalks, stone buildings and sand, it does not have any natural stones. This stunning realization made me see that every “natural” element in the city had been placed there and maintained. The sand for the beaches is trucked in where the seawall is not maintained concrete. The trees are cultivated. The dirt covers tunnels which conceal more tunnels. Everything is layers, nothing quite as it seems.

Ought of this came the thought that perhaps the city had forgotten where and what it was. But Chicago is semi-porous: even now you can traverse the layers and see the bones where the roads hit the water. Occasionally, the natural will invade violently (as it did in the flood of 1992) or else  hauntingly return lost pieces of its past: 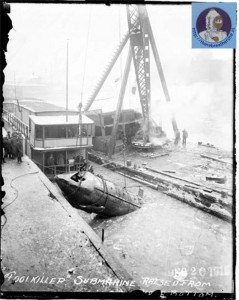 Chicago doesn’t really forget no matter how deeply its denizens bury, but perhaps I was worried that I was forgetting something as a result of all that time living in the uncanny. Years later, in collaboration with Mary Lucking, this particular anxiety surfaced as a proposal for  Memory Container. I wrote a false history and Mary drew some sketches:

“During the early days of subway travel, it was believed that prolonged journeys under the earth caused memory loss. As a public service, most underground train companies provided a means of recording important thoughts and ideas, so that the traveler could retrieve them upon return. Early examples include the Greater New York Memory Container (GNMC), which was installed in 1904 during the construction of City Hall station. This device was unfortunately removed in 1931 because of the value of the metal to the ongoing war effort, but originally consisted of 30,000 miles of memory enhanced alloy tubing curled tightly around the station in concentric rings. A mouthpiece near the ticket booth allowed riders to deposit their thoughts, and a listening post located at the top of the exit stairwell allowed for retrieval once the rider was safely above ground.

Later models substituted lengthy tubing for a tank of whale oil. Whale oil memory containers represented a major technological shift but were shortlived, soon to be replaced with devices making use of the newly discovered Viscous Memoriae, a fluid consisting of equal parts mercury, coal oil and ground bone.”

The Memory Container was proposed for a show in NYC (hence the reference to City Hall station). Although I fabricated the history based loosely on the strange but real technology of mercury memory, some variant of the collective unconscious fed me the bits.

I subsequently discovered (and lost) a reference to an actual machine that was built and installed at train stations that allowed riders to write notes in pencil on small strips of paper that would be wound slowly around under glass panes. The intent was a kind of twitter-like public message board for leaving information to fellow riders.

More recently Erik Davis posted a trip report on his visit to the underground Temples of Damanhur which included the following:

“…invisible forces are not just passively received in the Temples, but are actively generated and transformed through the literally hundreds of tons of copper wire whose dense and intricate coilings and couplings with other precious metals surrounds the corridors and chambers of the Temples. Damanhurians refer to this mostly camouflaged energetic circuitry as “selfic,” another esoteric remix of those swirling and seemingly intelligent energies — chi, od, radionic vibrations, Mesmer’s fluidum, Reich’s orgone — that rightfully beguile alternative healers and rightfully irritate hard-nosed empiricists.”

Whatever it is under there, beneath our consciousness, beneath our cities, beneath our temples – whatever layer it is lurking, linking or supporting, holding, keeping safe or hidden – the underground does not forget.

As I prepare to post this (my final HiLo post as Artist in Residence), I leave you with this short video piece entitled Working at Home which I made for the Riders On the Train exhibition at Axiom art gallery in Jamaica Plain. A voyeuristic  glimpse of the inside of my home rendered in subway monochrome with flashes of light and color, set to the soundtrack of my daily commute through the MBTA Redline Tunnels:

“I turned the gas down; I got into bed.

I said some words to the close and holy darkness

and then I slept.”