This post is the third and final in a three part mini-series on digital dérive.

In the first post I presented one example of an earlier digital dérive project I did while in Savannah Georgia. In the second post I wrote briefly about what a dérive is or might be. This is the first post annotated in green, so you can get a sense of what I was thinking while dérive-ing.

In February I was attending a conference in Savannah, Georgia. I had one day off to explore the city and since I hadn’t rented a car and the city is pretty walkable, I decided to do it on foot. I took my phone with me, and fired up the Twitter client, taking comfort in that virtual place my friends always are, no matter where they are. And for me, reading twitter means writing on twitter – so I thought I’d share my walk… 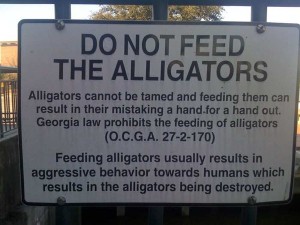 Immediately outside on my hotel balcony was this sign. The hotel has a strange tone. A typical generic hotel, but built for the athletes during the 1996 Summer Olympics, it is (like other post-Olympic sites) grander than it now needs to be. It actually feels a bit like Detroit: more infrastructure than is necessary for the population, a situation ripe for ghosts. This sign implies crowds of picnic goers (or at least people with food) and alligators. There are neither, just a large empty balcony with abandoned deck chairs, water lapping at the pylons. But as for ghosts… 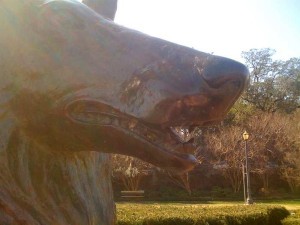 … Savannah obliges in spades. It is perhaps a little silly to put it in writing, but there is something “Southern Gothic” about this antebellum city. It feels like a city with secrets, languid and vaguely menacing at the same time. Echos of Europe, common in the Northeast where I grew up, seem oddly out of place here but wholly of-the-place at the same time. It’s a not entirely unpleasant but very uncanny feeling of tension. As a tourist visiting for a short time, I could only bounce across the surface but decided that the best translation of this mix of emotions was a story. I would tell a story, the one unfolding in my head on this walk. A spontaneous dérive that began with this one-off tweet above… 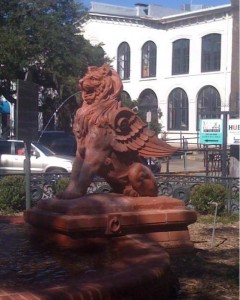 …again the city obliges my request for a werewolf story with mythical creatures everywhere. This is the wonderful thing about derives, the context is entirely in your own head, but shifts you to a different place, a different history, the fact that it’s a fiction is irrelevant, it’s as real as whatever the “real” story is. 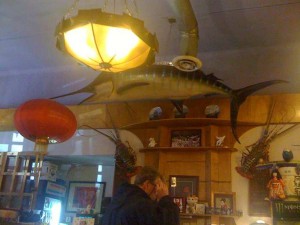 It also turned out that it was “Super Museum Sunday” in Savannah, a day (the Super Bowl) when the museums are entirely free city wide. I had wanted to see at least one of the historical houses and instead got to see abbreviated tours of a number of them. Photographs are not allowed, which doesn’t normally stop me, but the pace of the tours (a bit brisk due to the crowds) made it impossible to get anything useful. Still the tours were providing me with wonderful support for my mind now attuned to signs of the cryptozoological battles of yesteryear…

Both true facts – go see for yourself. The walls are thick to keep out the heat, which I imagine is as deadly a beast as a werewolf might be. The dining room of this particular house has a pane of amber colored glass above the fireplace that is cracked. I liked the idea of this stately house (built in the Regency style, but at an oddly small scale) surviving an onslaught. And how DID that window (10ft or more off the ground) crack?

I couldn’t figure out a way to make it into the derive, but one of the weirdest experiences as a northerner touring these houses is the way they deal with slavery. Almost every house tour I was on mentioned slavery head-on, but in most houses the slave quarters were closed, off limits or not part of the tour. At the Ownes Thomas house they are an optional walkthrough (IE now that the tour is over, feel free to check out the gardens… and the slave quarters). On one hand this feels like omission, on another it is the most honest approach: slaves were treated like slaves, their histories were not kept, their possessions not archived, their quarters (let’s say it: the maintenance barn) is empty. The walkthrough is a hollow building with some handmade placards that feel like some recent well-meaning organization (other than that which maintains the house) put together to be “more inclusive.” This is the “skip-able” part of the tour, encyclopedic signs in a context devoid of context.  But then how do you tour an absence? Absent histories. Occult histories. Untold stories. An entire parallel universe in those echoing slave quarters.

The Davenport house was built by a Northerner who specialized in the most ridiculous faux-finishes. The wallpaper in the entry looks like brick, but not like brick, more like a 1970s op-art version of brick that made me nauseous. We mix in here another true fact – the dining room is painted green. Summer in Georgia is bug season and apparently green paint deters flies.

Davenport was part of the volunteer fire department and a rifle was kept ready by the door for signaling… or so the tourguide says. The rifle is still there, leaned in the corner like an umbrella. 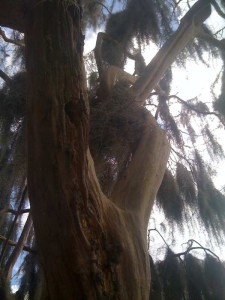 No Southern-gothic tale  is complete without a shot of moss. Here’s the thing: a staple of Hollywood, the moss still exudes a kind of creepy camouflage as if even the trees are wearing ghillie suits, hiding their true selves. These were in a graveyard, filled with victims of yellow fever. I broke the dérive and tweeted a few more thoughts and images of just the cemetary. 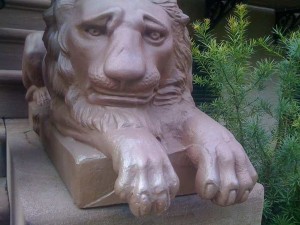 Yet another house and another strange experience for a Northerner: polite society’s pride in the Confederacy. A lovely older woman told me three times that this house has a table where General Lee himself dined no less than three times. The Andrew Low House is better known as the birthplace of Juliette Gordon Low, founder of the Girl Scouts of America. On this tour I am accidentally attached to a group of young Girl Scouts and their three minders. I feel creepy standing in the back surreptitiously typing notes into my phone, but only because of the occasional hairy eyeball I get from one of the Scout Leaders. I’m not sure if it’s my shoes or my fangs.

Also another fact: the style at the time was ball-and-claw furniture, but Andrew Low custom ordered his furniture with beehives instead. Why else but an aversion to paws? This is one of the concerned lions that flanks his entryway. 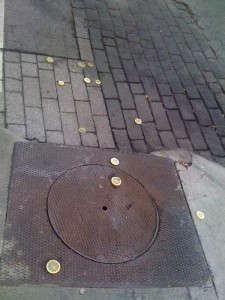 Apropos of nothing but the dérive in my own head. A quantity of sliced lemons strewn across the ground. I decide to call it an offering. 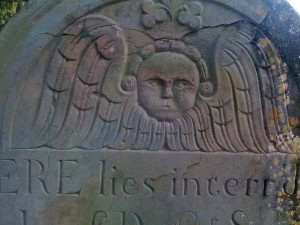 I felt like thanking the city and telling my “listeners,” that I was done, so I did… 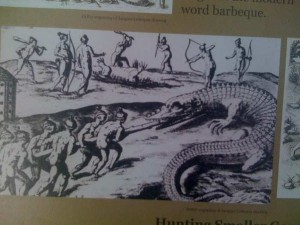 …but Savannah wasn’t finished with me.  I passed this historical sign on the way back. The indiginous doing epic battle with the alligators mentioned at the beginning. It couldn’t be more perfect… 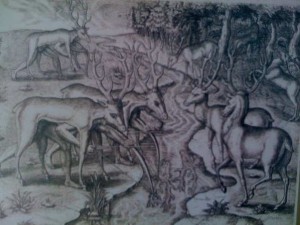 … unless it was the second sign I passed, an illustration of were-deer wielding bows.

This was the first major  lesson of dérive for me: step to the universe with your story and material shall  be provided. The next day I went for dessert to a popular local icecream parlor. On the counter was an autographed photograph of the owners with some actors on the set of a movie: specifically The Wolfman.