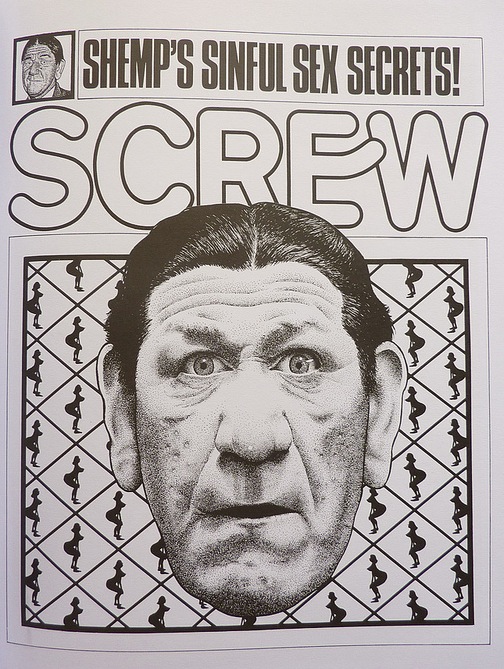 Rarely has an artist as brilliant as DREW FRIEDMAN (born 1958) done so much unlikable work without himself becoming loathsome. It’s a paradox that’s paroxysm-inducing but Friedman’s success as commercial illustrator has required him to consider a vast array of celebrities who deserve only to be ignored (“When I worked on Entertainment Weekly they always assigned me to do pieces on the TV show Friends. I could never bring myself to watch it…”) or excoriated. Friedman’s weak political caricatures are especially noxious, like wishing for Lucilius’ lost satires and receiving a Friends box set instead. There was — and remains, as evinced in his superb Old Jewish Comedians collections — another Drew Friedman: who as a child met Brooklyn gangster Joey Gallo at home of Jerry and Martha Ohrbach; who studied with Harvey Kurtzman at the School of Visual Arts; and who, with his two-years-older brother, Josh Alan, created the greatest, funniest cartoons of New York City’s 1970s-80s gutter age. Here was a theogony of overlooked genius (Nat Hiken, Jimmy Durante) and public delirium (Frank Sinatra Jr., Joe Franklin), oblique elevator men and Times Square smut hounds standing electric in jizz and ammonia. In “Fred’s Night Out,” I Love Lucy’s Mr. Mertz walks off set, “checks his traps in Harlem and collects monies owed” (“Here yo’ cut, Sugar Popa, Fred”); “pops into his numbers racket to collect his due” (“here go, Mr. Fred”); “awaits a half-ton shipment of pure Izmirian heroin” at the docks, then measures it. “Half a ton exact!”

On his or her birthday, HiLobrow irregularly pays tribute to one of our high-, low-, no-, or hilobrow heroes. Also born this date: H. G. Wells, Leonard Cohen, Bill Murray and Ethan Coen.