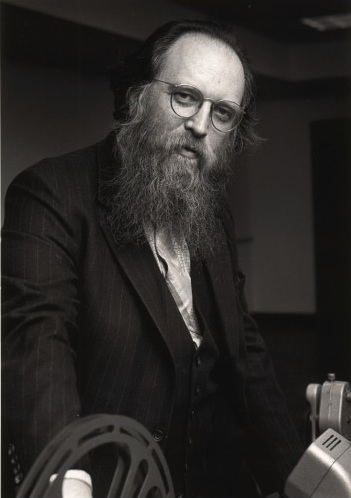 Avant-garde film is very often encountered first through intermediary texts before being viewed on screen. Visionary Film by P. ADAMS SITNEY (born 1944) is the treasure trove for pellucid descriptions of these elusive (and flaming) creatures. Like Harold Bloom’s The Visionary Company and Roger Shattuck’s The Banquet Years, Visionary Film casts an unbreakable spell over its readers with its own mythic artistic circle including Maya Deren, Stan Brakhage, Harry Smith, and Michael Snow. His essential 1974 book (last revised in 2002) established Sitney as our foremost explicator and explorer of American avant-garde cinema and a forerunner of the burgeoning discipline of cinema studies. Before Sitney, no scholar approached these filmmakers with as much seriousness or imbued them with such Romantic glamour. He conjured cinematic taxonomies — “trance,” “mythopoeic,” “structural” — acknowledging the filmmakers he described would likely spurn his categories. He understands his elucidations will never yield the vital mysteries of these films. A New Haven townie, Sitney found his way into libraries and film screenings at Yale starting at age 10 by being presumed to be a professor’s child. Later he would earn degrees there in Greek and Sanskrit and a comparative literature Ph.D., but he had already become enraptured by avant-garde film. The prodigious 15-year-old Sitney created his own newsletter-turned-journal Filmwise, leading to his editing Film Culture, traveling with avant-garde cinema showcases, and co-founding Anthology Film Archives. He continued the odyssey begun four decades earlier in Visionary Film with Eyes Upside Down, examining filmmakers like Marie Menken (who he considered Visionary Film’s most significant omission) and Su Freidrich through Ralph Waldo Emerson’s writings. Sitney relishes intricate and intimate enigmas, chasing orders within obscurity. (Brakhage and Maurice Blanchot are two of his fascinations.) With his immense dedication, rigor, and perception, Sitney is an incomparable intellectual historian.

On his or her birthday, HiLobrow irregularly pays tribute to one of our high-, low-, no-, or hilobrow heroes. Also born this date: Philip Larkin, Tove Jansson.