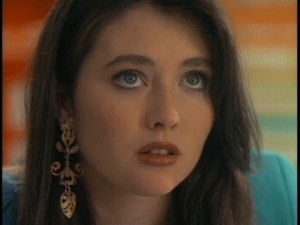 Though she has appeared in such iconic teen films as Heathers and Mallrats, SHANNEN DOHERTY (born 1971) shines brightest on television. Tennessee-born Doherty got her start in the Michael Landon empire, in a prime-time era filled with deracinated moral conundrums on the American frontier. In 1986, Our House had Doherty living in the present (but with Wilford Brimley) as a Midwestern transplant to California. She got to do the role again to perfection as Minnesotan Brenda Walsh, a recent transfer to West Beverly High in Beverly Hills 90210. Doherty was never better than when she played Brenda, a nice girl but a striver. The long time-horizon of television gave us the chance to see Brenda’s kind Midwesterner turn nasty in the withering heat of California — and Doherty can do teenage fragility and aggrieved hostility better than anyone. Jennie Garth spent years struggling to match Doherty before Brenda was exiled to Paris to get Doherty off the show. I mean really, that Dylan chose Kelly over Brenda was less a knock on Brenda than a sign that Dylan really was the faux-intellectual James Dean poseur we always suspected he was. Recently Doherty produced a reality show about the planning of her wedding, Shannen Says for a women-targeted, reality-show-heavy cable network. Alas, Doherty is only half as credible being Shannen as she was playing Brenda.

PS: Doherty’s career is a history of television entertainment from the late 1970s to the present: Father Murphy, Little House on the Prairie, Our House, Magnum P.I., Airwolf, Beverly Hills 90210, Charmed, Shannen Says. Ontogeny recapitulates phylogeny, but in the recapitulation theory the teleological vector is presumed to slope upward.

On his or her birthday, HiLobrow irregularly pays tribute to one of our high-, low-, no-, or hilobrow heroes. Also born this date: David Cassidy, Henry Darger, Herbie Hancock.