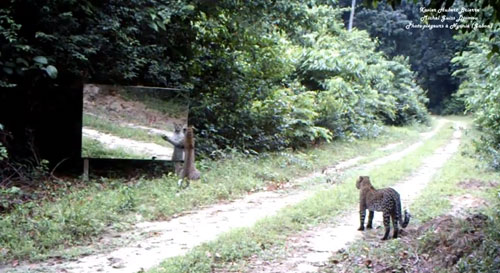 In 2012, videographers Xavier Hubert-Brierre and Michel Guiss Djomou installed security cameras, and a large mirror, in a forest in Gabon. This video has been making the rounds of the internet recently, and for good reason.

As @DJRupture tweeted, “we are leopards & the mirror is the web.”

And so we are:

To record the reactions of wild animals in front of a mirror 120×180 cm, Xavier and Michel have installed this intruder in a forest a few miles south from the equator line, near Nyonié in Gabon.  This video was made with one of our 29 Stealth Cam cameras trap. This clip is taken from videos totaling more than 20 minutes. It is with pleasure that we could provide scientists doing research on animal behavior. This mirror consists of 6 small mirrors in poor condition, due to heavy rain and termites, was moved and replaced by a mirror in one piece in october 2012.