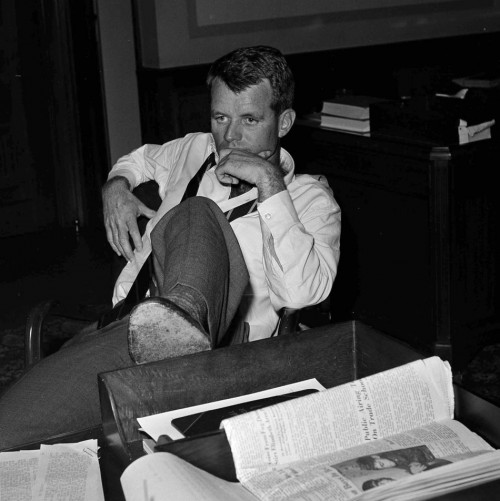 On December 4, 1964, New York state Senator-elect ROBERT F. KENNEDY (1925–68) was interviewed at the Carlyle Hotel in Manhattan. Kennedy — who’d resigned as U.S. Attorney General in September — was joined by Burke Marshall, his Civil Rights Division chief, and reporter Anthony Lewis; their conversation was part of a then-sealed Kennedy Library oral history project. Kennedy’s early months in office had been eventful. In early April, he reaffirmed his antipathy to organized crime with the surprise deportation of New Orleans mafia boss Carlos Marcello to Guatemala; weeks later, he began the long and dangerous process of cleaning up after the Bay of Pigs debacle. In May came the Freedom Riders’ protests against segregation on public transportation. The crisis began on the 14th in Anniston, Alabama, where the Ku Klux Klan attacked and firebombed their bus. Further harassment followed in Birmingham and when they arrived in Montgomery on the 20th, Justice Department aide John Seigenthaler, Dr. Martin Luther King, and — emboldened by Alabama Governor John Patterson’s inaction — the Klan awaited. By that night, Seigenthaler had been severely beaten and a mob had trapped King and 1500 supporters inside the First Baptist Church. Burke Marshall recalled Kennedy’s phone conversation with an agitated King. If he hadn’t called in the U.S. Marshals, Kennedy said, “you’d be dead as Kelsey’s nuts right now.” Unfamiliar with the phrase, Lewis asked its meaning. “It’s Irish, I can’t explain that,” Marshall laughed. Kennedy retold the story. “Who’s Kelsey?” Lewis asked. “I don’t know who Kelsey is.”

On his or her birthday, HiLobrow irregularly pays tribute to one of our high-, low-, no-, or hilobrow heroes. Also born this date: Chester Gould, Benoît Mandelbrot, and Miroslav Tichy.