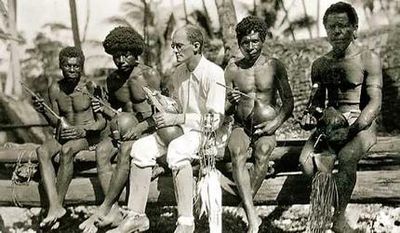 In its early years, Anthropology had a recognizable form: Anthropologists studied “primitive” peoples, present-day stand-ins for instances from the archeological record. Anthropologists examined kinship systems, law-like customs, and “pre-modern” beliefs; they did so primarily using written materials collected by missionaries, gentlemen travelers, and other adventurers. Beginning with his research in Melanesia in 1914, BRONISŁAW MALINOWSKI (1884-1942) pioneered a method that transformed the field — in modern parlance, DIY data production. Aided by wartime restrictions on his movements, Malinowski spent two years in the Trobriand Islands, learning local languages to enable him to communicate effectively, and living in or near the villages he was researching. The products of these and later trips were powerful arguments about “savage” economics, in Argonauts of the Western Pacific, about “savage” sex, in Sex and Repression in Savage Society and The Sexual Life of Savages, about “savage” law, in Crime and Custom in Savage Society, and about “savage” gardening, in Coral Gardens and Their Magic, Volumes I and II. These were near-irrefutable because of the persuasive power of Malinowski’s prose, supported by a tidal wave of facts and the textual persistence of Malinowski the actor and observer, collecting the data. After this, and up to now, participant observation has been the order of the day for anthropologists. Even the posthumous publication of Malinowski’s fieldwork diaries, which revealed that he didn’t spend as much time with his subjects as his books suggest, that impure thoughts were a constant struggle, that he alternately lusted after and despised the islanders, and that he used foul pejoratives to describe them, often, hasn’t lessened the impact of his work on anthropology. As the field has exploded in nearly every other respect — no more “primitive” or “savage” peoples, social evolutionary arguments are verboten, kinship is passé, “custom” and “pre-modern” don’t hold up — anthropology’s method, Malinowski’s method, is its remaining distinguishing characteristic as a discipline.

On his or her birthday, HiLobrow irregularly pays tribute to one of our high-, low-, no-, or hilobrow heroes. Also born this date: Jackie Chan and Bobby Bare.