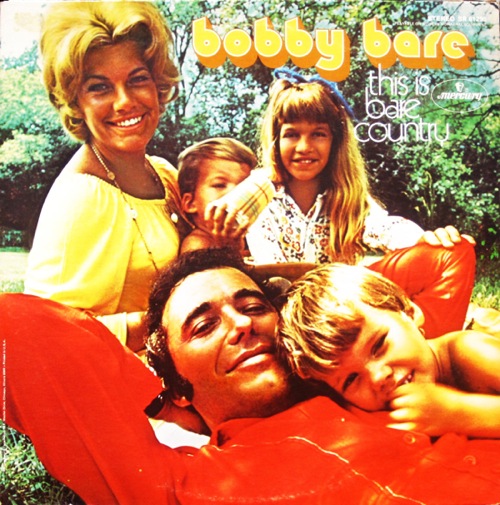 “The greatest song hound of all” said Waylon Jennings of his friend BOBBY BARE (born 1935), and Ol’ Waylon — himself a superb interpretive singer — would know. Bare came from Ironton, Ohio, where he read Mark Twain and discovered twelve-hour days farming aren’t much fun. Moving to California, Bare wrote and recorded “All American Boy” (1959), a talking blues which hit after he sold the song for $50 outright. Then the Army called. Signed by RCA after his discharge, “Detroit City” (1963) made Bare a star and earned him a role in director Raoul Walsh’s final film, A Distant Trumpet (1964). With his laconic intensity and unfailing taste, Bare’s musical triumphs continued, including A Bird Named Yesterday (1967), a concept album about urban sprawl and the Summer of Love’s least known masterpiece. In 1970, Bare moved to the Mercury label, recording many tunes by Kris Kristofferson (“Come Sundown,” see below) and Tom T. Hall (“Mama Bake A Pie, Daddy Kill A Chicken,” about a paraplegic soldier’s return from Vietnam), and a spare, staggering version of “Leaving On A Jet Plane.” Bare’s 1972 return to RCA, an all-Shel Silverstein affair, further proved his empathetic brilliance, as did Cowboys and Daddys (1975), which roped in such then obscure songwriters as Dave Hickey and Terry Allen. How’d Bare swing it? “I just stay outta the way. Naw — I just do what I want to do and let everybody else do what they want.”

On his or her birthday, HiLobrow irregularly pays tribute to one of our high-, low-, no-, or hilobrow heroes. Also born this date: Jackie Chan.