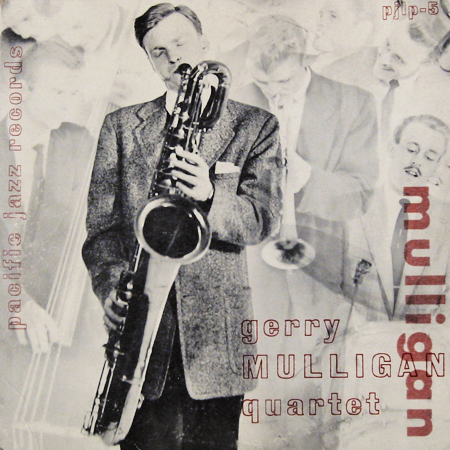 “We play GERRY MULLIGAN [1927-96] loud” wrote Jack Kerouac in The Subterraneans (written 1953, published 1958) and he wasn’t alone. Among the most inventive post-war jazz musicians, Mulligan was a rare triple-threat: virtuoso baritone saxophonist; able composer; and brilliant arranger able to assimilate bebop, big band swing and traditional New Orleans polyphony into his own unique concept. In 1946, he left Philadelphia for New York, where he joined the 1948-1950 Miles Davis nonet sessions later compiled as Birth Of The Cool. Moving west, Mulligan discovered trumpeter Chet Baker and the sound that turned both into stars. Then, in April 1953, the heat closed in: “Hot Lips Bopster, Aide, and 2 Wives Jailed; Nab Dope” the Los Angeles Mirror blared. In jail, Mulligan kicked heroin, while Baker went solo; afterwards, Mulligan continued making superb music both as leader (see “Bernie’s Tune,” below) and guest, including memorable encounters with Thelonious Monk (1957) and Ben Webster (1959). Mulligan’s celebrity also allowed for unique variations on the art-life dialectic, like his film performances in I Want To Live! (1958) — based of the life and execution of convicted murder, Barbara Graham, whose trial judge, Charles W. Fricke, had presided over Mulligan’s narcotics case — and, better late than never, The Subterraneans (1960). In between arrived the Spring 1960 Kenyon Review, including the short story “Entropy” by Thomas Pynchon. There, jazzman Duke Di Angelis urges a confused Meatball Mulligan to ponder his namesake’s piano-less music more closely. “‘But,’ Meatball said. ‘Just listen,’ Duke said. ‘You’ll catch on.'”

On his or her birthday, HiLobrow irregularly pays tribute to one of our high-, low-, no-, or hilobrow heroes. Also born this date: Black Francis and Georges Darien.