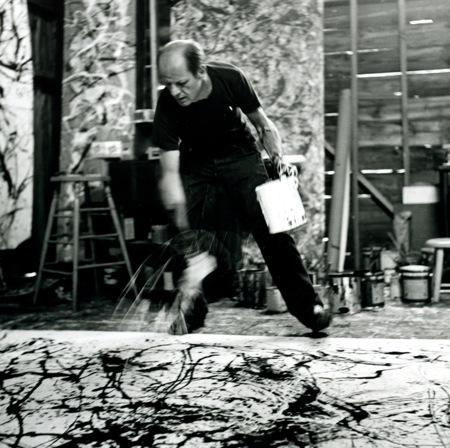 One of the few artists whose name became a synonym for “Art,” JACKSON POLLOCK (1912-56) was also a synonym for “America.” Hailing from the west (Wyoming, Arizona and California), he arrived in New York just as it became the right place at the right time. Critic Clement Greenberg would argue that Abstract Expressionism, with Pollock at its eye, was the wild west of the new storming the old, the old being what was seen as European and Asian decadence and decay, in the aftermath of two world wars. Pollock’s drip paintings (“action painting”) lacked not only realistic figures but form itself; positive and negative space twisted and roared; foreground and background fused into a space both flat and infinite; representation, narrative, and symbolism were scattered on its furious winds. Action painting, as per its name, was as much about the process as the result, and Pollock, although he walked on the image, literally didn’t work on it. He worked above it, in the air, dripping and flinging ropes and splatters of paint, choreographing their weight and fall as the ultimate artistic gesture; art was what happened betwixt brush and surface. Greenberg, despite his Cold War positioning, was not wrong: these paintings were something new in art, and just in time; they consigned everything before them to history. Sadly, personal demons consigned Pollock to history before his time. Jungian analysis and working in his barn well away from the city could not calm his struggles with alcoholism and anger. His life ended at 44 in a crushed car at the base of a tree, its tangle of metal and lives a crude echo of what he had achieved in art.

On his or her birthday, HiLobrow irregularly pays tribute to one of our high-, low-, no-, or hilobrow heroes. Also born this date: Ernst Lubitsch, Rakim.