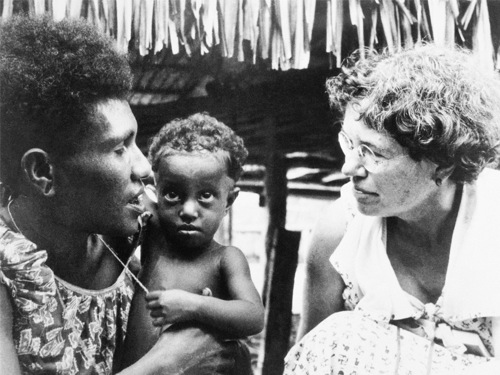 Coming of Age in Samoa, her 1928 immersion classic, redefined the culture to which cultural anthropologist MARGARET MEAD (1901-1978) returned. In the 1920s Mead embarked for the South Pacific to conduct fieldwork on the island of Ta’u. Her findings of unvexed adolescence among Samoan youths were at odds with the fraught transition of young Americans; the idea of eagerly expressed sexuality, especially for girls, was shocking. And influential: Mead’s research weakened the retaining walls of postwar conformism and eventually helped usher in not only the sexual but the feminist revolution. Why? Because Mead argued that culture makes a difference. As do individuals — the notoriety of her published findings made her a celebrity, a role she embraced, relishing her own transition from iconoclast to icon over the length of the 20th century. It’s been suggested that Mead’s studied Samoans may have been less freewheeling than she represented; nevertheless, she was right to argue that people range over wider definitions than those occasioned by their surroundings. We live in outline, bounded by cultural conventions. Mead showed us how to color outside the lines.

On his or her birthday, HiLobrow irregularly pays tribute to one of our high-, low-, no-, or hilobrow heroes. Also born this date: Philip K Dick and Bill Hicks.