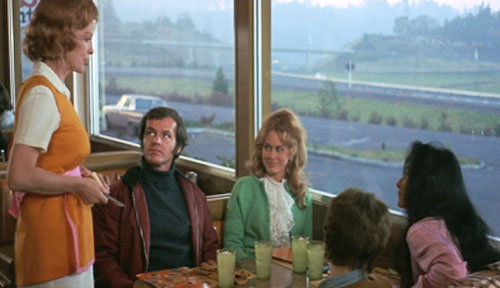 In Five Easy Pieces, Robert Eroica Dupea, played by a young-ish Jack Nicholson, has “dropped out” by dropping down a couple of levels in the class structure. Frustrated by the constraints of a serious classical music career, when we first meet him he is working on an oil rig, hanging out with his working class buddies at the bowling alley, and dating a diner waitress (Karen Black), in a thorough rejection of his upper class background and ideals.

However, his new identity doesn’t fit him all that well either. Stuck in a traffic jam on the way to the fields one day, he leaps out of the car and discovers an old piano on the back of an open moving truck. Pulling the cover off, he starts playing Chopin’s Fantasy in F Minor on the out-of-tune upright, accompanied by the Art Brut of the commuters’ horns.

Then the one-two punch of discovering his girlfriend is pregnant, and his father is dying, sends him back on the road, ostensibly to visit the family compound and pay his last respects, but really to question again his place in the scheme of things. 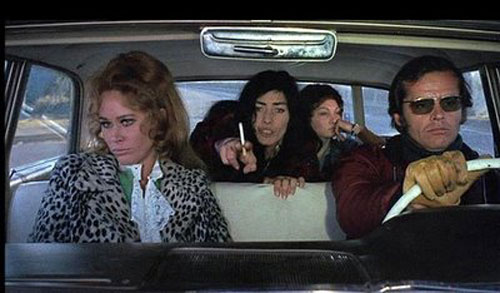 So he jumps in the car and starts up the Pacific Coast. While his girlfriend smothers him by alternating baby talk with Tammy Wynette tunes, they pick up a pair of hitchhikers bound for Alaska. Providing social commentary as comic relief, one hitchhiker goes on what is presumably a states-long rant about consumerism, the environment, and the hidden costs of late capitalism. All of which is right but none of which you can imagine yourself wanting to hear when trapped in a car together for days. But it puts a little space between him and his girlfriend, as if to remind us that the structure of society does play a significant role in who we get close to, despite experimentation with social spaces.

In Puget Sound his family maintains an Ingmar Bergman-like compound on an island, where, following their ex-prodigy patriarch, they have all dedicated themselves to classical music. It is inferred that Bobby was the most talented of all, and we see some black and white Van Cliburn-style photos. It was this hothouse atmosphere of high art that Bobby rejected when he left. With the entire 1960s happening a ferry ride away, how could a young person with any passion insulate themselves by playing prewritten notes from hundreds of years ago?

Yes, there is artistry in interpretation; in fact classical pianists predicate their careers, and themselves, on exactly that. But all the notes are neatly contained in measures, all the roles are prescribed, all the interpretations are determined: adagio, forte, pianissimo, glissando, legato — da capo. Where is there room to find yourself? Where is there room for something new? 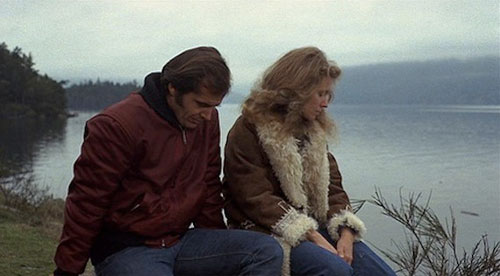 But while at the compound he tries to reach across anyway, attempting an affair with his brother’s fiancee. Catherine (Susan Anspach) lives fully within classical music. She is attracted to Bobby’s freewheeling energy, but realizes that he’s not rejoining her world; and she, despite the open door, has no intention of embracing the uncertainty on offer in his. The tragedy, it is suggested, is that only with a fellow social refugee can Bobby have the option of finding or creating some kind of new identity, as well as a new world, into which to fit himself.

In an emotional scene with his father, he breaks down and confesses that he hasn’t found any answers “outside,” either:

I move around a lot, not because I’m looking for anything really, but ’cause I’m getting away from things that get bad if I stay.

But the father has had a stroke, and cannot speak. What do you do when the promise of the 60s doesn’t pan out? When the predetermined role is not what you want, but your class-based road-tripping is revealed as tourism? The father says nothing, as if to say, “well, this was what we had to offer. You didn’t want it. We (the establishment) don’t have any advice for your new world. And if you don’t want that either, well . . .”

The failure to communicate is epitomized by Bobby ordering toast in the diner. Chicken salad sandwich, hold the mayo, hold the lettuce, hold the chicken . . .

He does not get his toast. That he doesn’t get his toast is only further confirmation of the fact that he has not found a place in either high- or lowbrow culture. It is not on the menu.

What is on the menu? Or will the menu be rewritten? The story ends in ambiguity, a long shot of a gas station summing up the entire decade to come, its broken promises, its open-ended swarm of attempts and options, its apathy and confusion. Life doesn’t stop just because you haven’t figured it out. 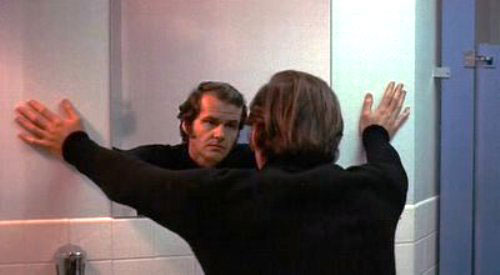 A version of this essay appeared on the Brattle Theater Film Blog, June 2009.