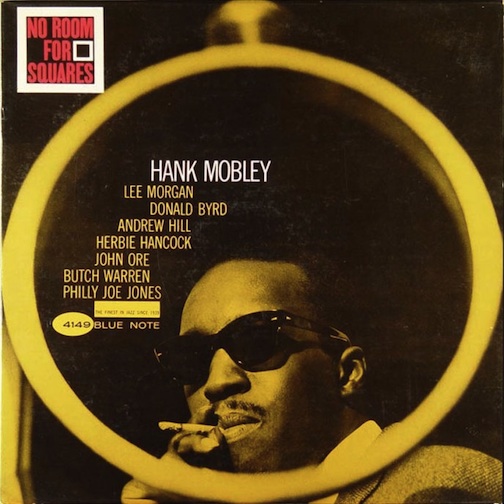 “I played with [Charlie] Parker many times,” recalled tenor saxophonist HANK MOBLEY (1930-86). “He didn’t say, ‘practice those scales’… He just said ‘Baby, you’d better learn those blues.’” This the Elizabeth, N.J. native did, becoming by April 1953, when Max Roach hired him, one of the most frequently recorded musicians of his era. While his sideman work alone (including seminal sessions with Art Blakey and Horace Silver) proved Mobley’s talent, it was his solo records for Blue Note which repeatedly demonstrated his unique, subtle, and evolving, genius: a sound combining swing-era warmth with the rhythmic acuities of be-bop and an inventive yet pleasantly funky compositional sense. While a high-profile 1960-61 stint with Miles Davis proved dissatisfying, Mobley was making the albums for which he’d be revered (Roll Call, Soul Station, Workout). In 1964, heroin possession landed Mobley in prison; he continued writing, however, and a March 1966 octet session — released in 1981 as A Slice of the Top — contained some of his finest work (listen to “Hank’s Other Bag,” below). In 1968, like many black jazzmen, Mobley went to Europe — but there were too many musicians there, not enough work. Upon returning, America was just as bad. He made a final Blue Note album in 1970, recorded once more in 1972 and then darkness (neglect, illness, poverty) enfolded him. Were it otherwise! Dexter Gordon: “Ah, yes, the Hankenstein. He was so hip.”

On his or her birthday, HiLobrow irregularly pays tribute to one of our high-, low-, no-, or hilobrow heroes. Also born this date: Marc Chagall and Robert Heinlein.