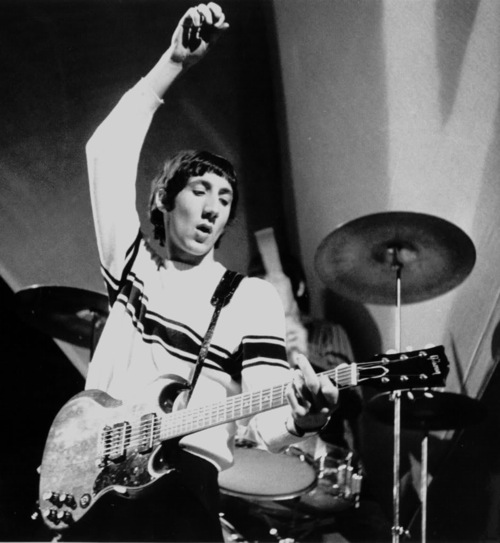 Visually, The Who were a whorling vortex, a maelstrom: PETE TOWNSHEND’s (born 1945) arm the violent uncoiling of a watchspring, Daltry’s microphone twirling like a lariat, Moon flailing around his kit like an eight armed monkey. And all anchored by Entwhistle’s stolid center, hanging on to his bass like a sailor lashed to the mast. The only forms that could contain such a Blakean blast furnace of hellish energy were Townshend’s songs. The first singles articulated every Young Mod’s concerns, little anthems for the post-rationing generation. The second wave of singles, though, were pervy little short stories. Gorgeous little snaps of the psyche in “I’m A Boy,” “Tattoo,” and “Pictures of Lilly.” It was long thought that the early Who were powered by Pete’s sexual frustration, but as more of his private life has come unraveled in public it seems like he was working out of darker shadows: Ivar the Engine Driver and Uncle Ernie prefigure revelations that Townshend was sexually abused as a child, and recast his work. The ironic distance in many of those songs collapses down, and we find that maelstrom in Townshend himself, gathering his band up in his widening gyre. Mere anarchy loosed upon the world. It saddens me to know that Townshend’s hearing continues to deteriorate. Though he’s grown Donnish in his sixties, I suspect he still needs that release. How can he let fly without a Marshall stack to guide him? Where will that storm trapped between his ears go? Will he allow himself that peace he’s so often written about? Pete, I want to tell him, you are forgiven.

On his or her birthday, HiLobrow irregularly pays tribute to one of our high-, low-, no-, or hilobrow heroes. Also born this date: André the Giant and Joey Ramone.