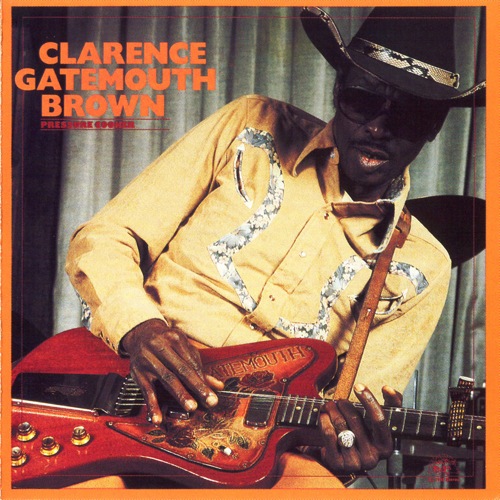 “The Negroes had their club and the whites had their club,” recalled not-just-a-Texas-bluesman CLARENCE “GATEMOUTH” BROWN (1924-2005). “And I’m just breaking out of the chute and, of course, I had to break out with my people.” From 1949 to 1959, this Brown did with a series of blistering singles for the Houston-based Peacock Records charting both his musical rise and what would prove a commercial impasse: the black market for his uniquely down-home swing was too small, the white one largely unknown — although Gatemouth’s sides were among those revered by teenage R&B freaks Frank Zappa and Don Van Vliet. Brown emerged from obscurity in 1965, leading the house band for The!!!! Beat, a syndicated R&B television program out of Nashville; Gatemouth jamming with Freddie King (below) is but one of the show’s ineluctable glories. Adrift again, Gatemouth moved west, working as Deputy Sheriff in Aztec, New Mexico because he’d always been impressed by the Texas Rangers’ uniforms. Things turned around in the 1970s, when, first, French admirers induced Gatemouth to make his first album (the topical “Please Mr. Nixon” a highlight) and genial virtuoso Roy Clark invited him on Hee-Haw. This wasn’t as weird as it sounds: Gatemouth had always been country, jazz and cajun too. “You take some bits of each one of the styles of music and put them together and just keep adding on, just like a puzzle.”

On his or her birthday, HiLobrow irregularly pays tribute to one of our high-, low-, no-, or hilobrow heroes. Also born this date: Kathy Acker.