Sixth in a series of posts.

Kids suck their thumbs. Big women squat and stir big pots of roiling rice. We’ve been filming for so many months that my eyes see in squares. The air is gag-grey with smoke. I think, inappropriately, that the diffuse atmosphere will make for moody footage. A woman flicks a rag from her face to her baby’s, over and over, a cow tail of a flick, clearing flies. The flies are in an endless hover-and-land pattern. I think, absurdly, of the endless helicopter traffic in this post-disaster country.

Camp Pinchinat. My students are filming food distribution. The army has sectioned off an area for the women to cook, nets to control the hunger lines. Children and women eat first. Men eat last. Someone has decided men don’t share as well as women. A few years ago I went to a Romanian mafia gypsy dinner where the men and boys ate first. Later, the women and girls picked over the bones. 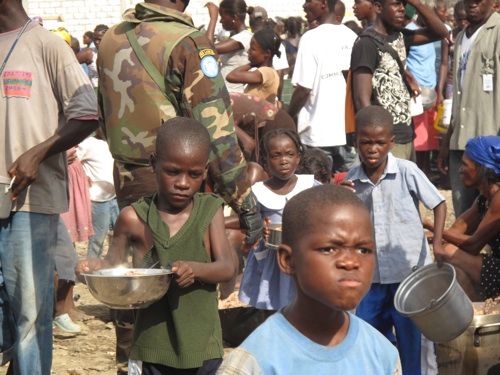 I have blinders on. I don’t look the worst of the suffering straight in the eye. That would compel me to do something for that kid with the fungus on his face that a three-dollar tube of antibiotic cream would cure. I have that three dollars in my pocket. It stays there. I’m here to teach film. The blinders stay on.

The camp has split in two. One group is loyal to the Venezuelans and the other depends on the Canadians. Rumors waft about like bad smells: the Canadians are leaving, people are angry that the big Venezuelan flag flies slightly above the smaller Haitian flag, and want to tear it down. People should leave the camp for higher ground before the rainy season hits, get seeds into the dirt before planting season has passed. But the Venezuelans have promised to build temporary shelters to whoever stays and the World Food Program keeps the rice coming. Mattresses are stolen for the prostitution tent, women are raped, food stolen, the Venezuelans have handed out knives. Who knows what is true. The only indisputable truth is that a hard rain is on the horizon. 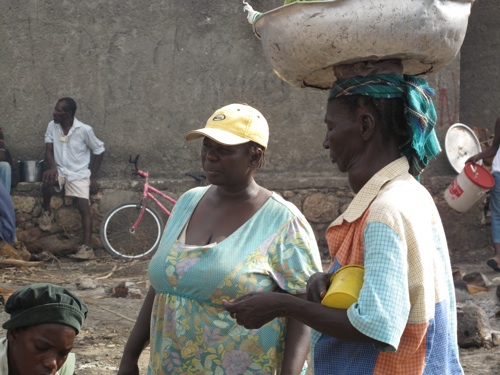 I watch my students drift around, choose shots, film. I count silently to ten to make sure they are holding shots long enough to make editing easy, and check their viewfinders for focus. I take two shots with my digital camera — an overhead of the bubbling pot of rice and a kid beating his dinner tin with a wooden spoon — and show them to my students. This is a simple visual sentence: food, anticipation. I’m teaching how to compose sentences with shots, and how to find a beginning and end shot for a pan that will tell a story within the story. I take three more shots: a mound of garbage, a small boy making a fragile tatter of a kite out of a black scrap of a garbage bag stretched over two sticks, another kite soaring above. A visual sentence: out of misery rises hope. I take two more shots: the garbage and a crying baby. Misery to misery. Which do you want to say?

The long line for rice erupts into an impromptu jam session: kids beat on tin pans and pots with spoons, slink and slither to the beat, smiling wide. This is why I love Haiti. Sure as the sun rises every day, joy will rise out of the muck. 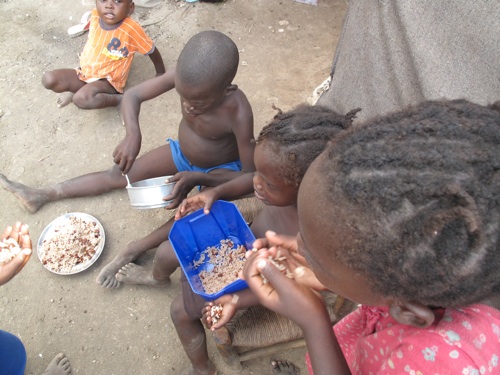 That night it rains. A pounding, unforgiving rain. The rain rips down tarps, gushes in rivers, drenches everything.

In the morning, my students are glum. They drape themselves over chairs, listless, dreary, bleak. It’s a sunny day, but last night’s misery is reflected in countless muddy puddles. Laughter has left the room.

Last night’s storm heralds what everyone knows: Rainy season is about to hit, then hurricanes, which will bring a new dimension to hell. Water will pool, mosquitoes will breed, mold will flourish. The mounds of garbage will bake. All the things that thrive in stagnant water and baked garbage will arrive: fungus, worms, dysentery, malaria.

Lamour turns up at the school tent with footage of last night’s torrents. We talk about making a PSA, a Public Service Announcement film, about how to survive the rainy season in the camps. We watch the footage. It’s miserable. Spirits are sinking. Some of my students live in Pinchinat; everyone has friends there. Their people are miserable. 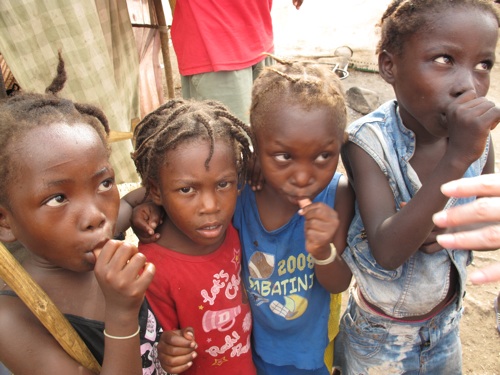 I ask the students if they think it would be a good idea to bring movies into the tent camps, to cheer people up, especially the kids.

Zoul, our sound expert and local club DJ, rummages around, pops a DVD into a computer. YouTube pratfall videos: a bulldog rides a skateboard and crashes, a collie lurches on its leash knocking a baby over. Dumb, hilarious pratfalls. We laugh. Escalating, loony, unstoppable laughter. The kind of laughter that becomes its own monster. We all know we have to show these in the camps.

Silver, our technical teacher, heads off to see what equipment survived the earthquake. We need a screen, a projector, speakers. Juice Master Junior Joven will check on our generator. Thibaud and Sergo will head to the camp to get permission to have movie night. Movies we have. Movies we’ve been making every day. Movies by and about Haitians, in Creole.

Another student runs breathless into the tent. She’s gotten footage of a man who is making lights for the camps. He makes a little wire cage, attaches a tiny flashlight, and stretches a condom over the frame. They are beautiful. Condom lumière. It feels like a sign.

Condom lights. Manasse suggests that we could call our movie nights “Cine Lumière.” I think of the Lumière brothers, who made some of the very first films: a film of a barreling train that had viewers running out of the theater; dancing skeletons. Luminous, floating enchantments that we could bring into the camps. 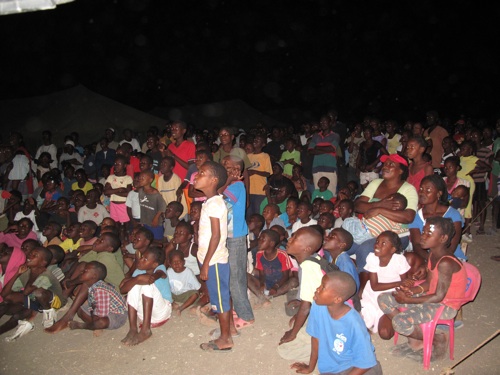 A few days later we pull into Pinchinat with a pick-up full of equipment: oversized speakers and an undersized screen. Zoul cranks up some dance music as a Pied Piper call. It takes us several hours to set up, but a little past nightfall, the trickle of kids having turned into a mass of anticipation, the night lights up with film. At first there is a bewildered silence, then giggles tickle the air, ricochet, join squeals of delight, escalating titters.

When joy rises out of relentless muck, it is a joy like no other.

Watch the video Tent in the Water.

NEXT! Vodou Nights: waiting for the gods to come.