One Small Step – No, Wait 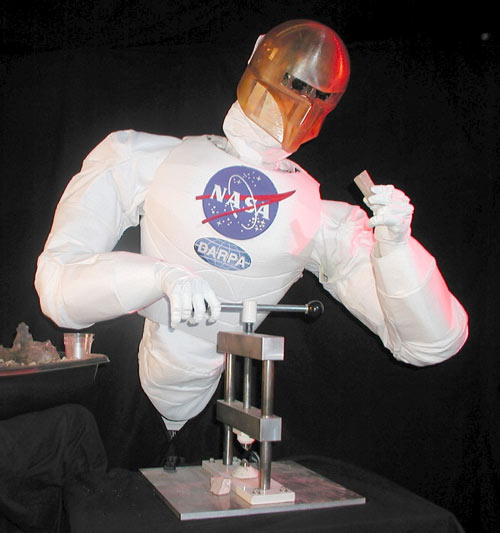 Of course, there are already robots in space. The Mars rover, the Pioneer and Voyager probes, the Hubble telescope, any number of highly specialized machines repurposed from industrial assembly lines — there are many kinds of robots. But Robonaut 2 is different. It has opposable thumbs.

Robonaut 2 (R2, for short, although it looks more like C3PO) has 40 sensors in its head to input light and other data from the environment, while an infrared sensor in its “mouth” helps with, um, depth perception. And — not sure how helpful this is in space exactly, but — it can write! More like drawing, in this case: “Hello (world) . . . I’m in space! I like it here!”

Created to perform basic, dangerous, and/or boring tasks, R2 is scheduled to be sent up to the ISS this week on the shuttle Discovery, and reprise its earth-bound motions in orbit, before presumably expanding its sphere of operations in space and time. 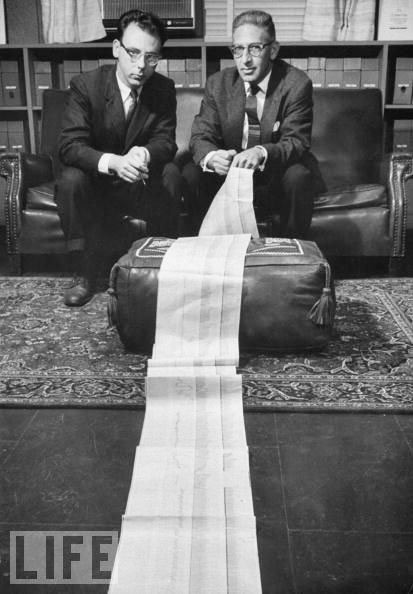 [Manfred Clynes and Nathan Kline, originators of the term “cyborg”]

Aligning itself closely with Clynes and Kline’s 1960 original specifications for space-traveling cyborgs, R2’s attributes include not needing to breathe, not having to regulate blood pressure, not losing bone mass, and — importantly — not getting bored (one of the more advanced tasks in its future may be vacuuming). 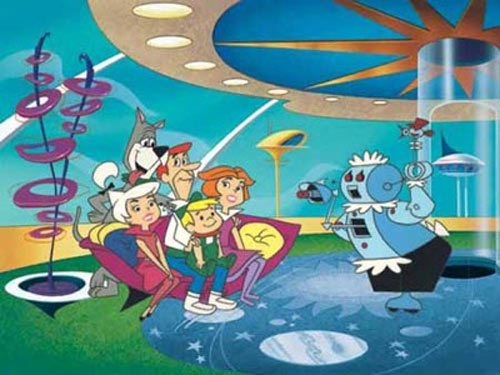 So although it might break down, it won’t freak out, and it’s unlikely to go on strike, something that GM might, just might have had in mind when it signed up to co-create the robot with NASA. The sit-down strike famously originated in automobile assembly plants, and was the killer app of the powerful midcentury industrial unions. 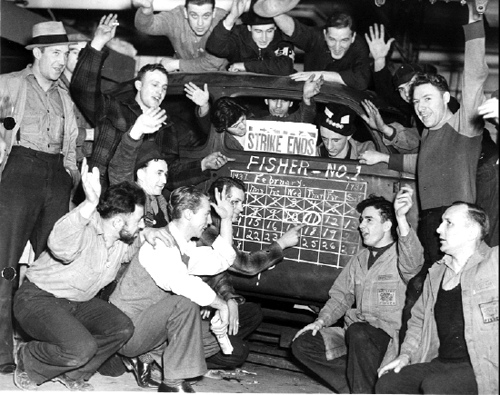 And why is there no danger of a sit-down strike?

It has no legs. It’s just a torso (the top of the torso), and arms, and hands, and a head.

But (as one might inquire of Drake in his later role as POTUS): do we really need the rest of us, in space?

Concept-car plans for the Robonaut include the possibility of wheels, but how about bouncing, or slithering? Or extra arms tentacled with specialized sensors, a cyborg version of our (late) favorite psychic cephalopod? Perhaps as we fine-tune spacebots they will gain manipulable “feathers” to regulate heat, or instead resemble amoebas, or even distributed neural networks, connecting wide-ranging arrays of inputs with encoded signals.

A golden face? Opposable thumbs? That might be part of the rest of us that we just won’t need, out there.

READ MORE from HiLobrow about cyborgs.