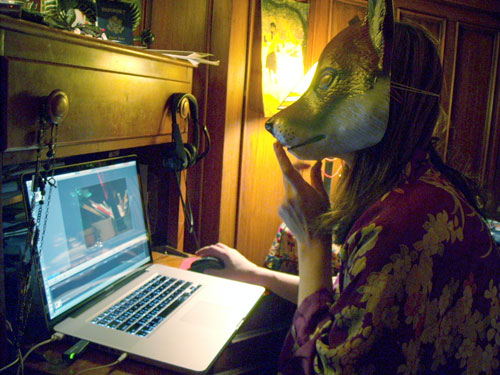 Before chatroulette, there was the Circuit. A combination of Match.com, Skype, and the transporter from Star Trek, the Circuit allowed you to scroll through the evening’s available hotties with the “next” button, rez them in your living room, then conduct your effortless seduction with caftan and sunken leather seating. No expensive bars, no friends of friends, no agonizing over a profile; the system was clean and efficient. It probably would have been a little more efficient if you had an “advanced search” option for your preferred type, or at least your preferred gender; but whatever, it was always only one night, and everyone was young enough that the notches of the new trumped the ennui of the old: inevitably, there was Michael York.

We don’t have transporters yet, but we’ve brought the other technology online: profile pictures, video ads, lists of likes and dislikes, finely-grained pseudo-statistical analysis (do you consider yourself a dog-lover, on a scale of 1 to 10?), date-like-it’s-a-job-interview advice, and other pre-baited hooks. And of course the internet itself, which more often than not collapses distance while managing to drain the immediate of any charge of je ne sais quoi. Actually, nous savons exactement quoi, it just doesn’t fit into the nice Apollonian grids of radio buttons. Or 1’s and 0’s in the database.

We get un petit quoi back in chatroulette, a randomized video chat with two screens, a chat window, and a “next” button. Log in, see who pops up, stay and chat — or whatever, or hit “next.” Clean, efficient, and with a little frisson of mystery — who is out there? It might be “Some Enchanted Evening!” Or, probably not! But, you never know! And it’s a little voyeuristic and a little exhibitionistic and I’m not sure if that’s taboo but it’s kind of exciting and let’s just, you know {beer} {giggling} log on for a minute, and, um, check it out! 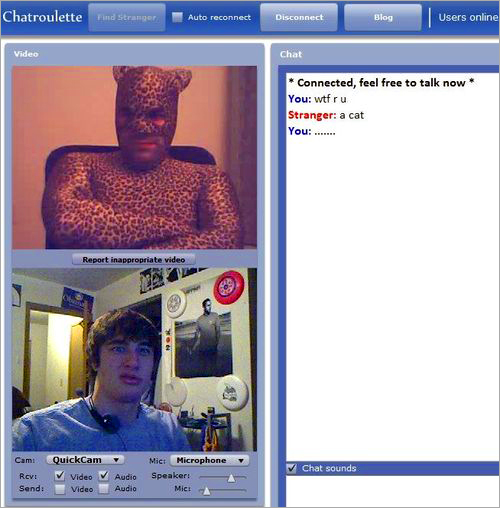 Like all social networking platforms, it is a relatively unscripted space. Many people are posting, there is the occasional short back-and-forth, but ultimately, the action (“um hi.” “hi =)” “wassup.” “how r u girlz 2nite?” etc.) is repetitive and a little dull. Not necessarily because the participants are dull, but because the lack of narrative structure homogenizes the space. Endless horizons of sameness make you long for a single, strategic rock to trip you up.

Another creation story says that there is “no earth, only water.” Silver Fox (a female) feels lonely and mentions this in a prayer song, and then meets Coyote. Silver Fox makes an artistic proposal: “We will sing the world.” They create the world together by dancing and singing. As they do so, the earth forms and takes shape.

[-Siri Woodget, in an email, regarding Coyote and Silver Fox, Miwok tradition]

Chatroulette is a space for the id, for the powerful primal drives, for sex, for play, for chaos; at least in potential. It’s anonymous, visual, and immediate. This space invites chaos dancers, trickster gods, who guide us through ambiguity, yet who also delight in tripping us up, tricking us, implicating us in their whimsical, often dangerous, aesthetics.

Both more and less than the ego, the id is stronger and older than the Self and can overwhelm in a surging sea of desire, rage, and fear. But it is also less, in that it cannot determine a desire, even its own; it dwells in a unindividuated, furious present, while desire requires a future, and a past. And an agent. We are its only way out, and it is our only way through. (I’ll leave out the superego for now, which basically thinks you have better things to do. And call your mother.) It is through this uneasy, unending negotiation that we define ourselves, and conduct our journeying. 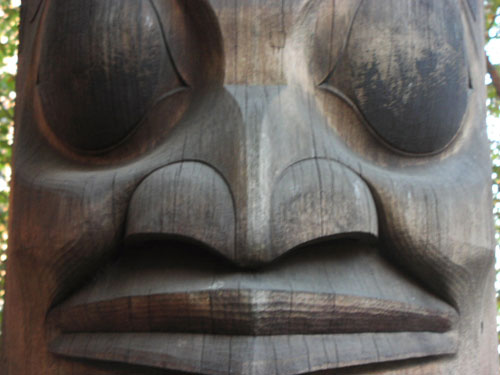 Our guides thus far have been externalized, non-human entities, who we follow at our own risk. Chaos dancers have an inhuman amorality, or perhaps it does not make sense to speak of morality here, but rather of ambiguous intent, aligned to their ambiguous dwelling. However, in the midst of chaos the trickster is all you get; the rest of the gods have their set definitions and guarded perimeters, and don’t need to venture into the borderlands. 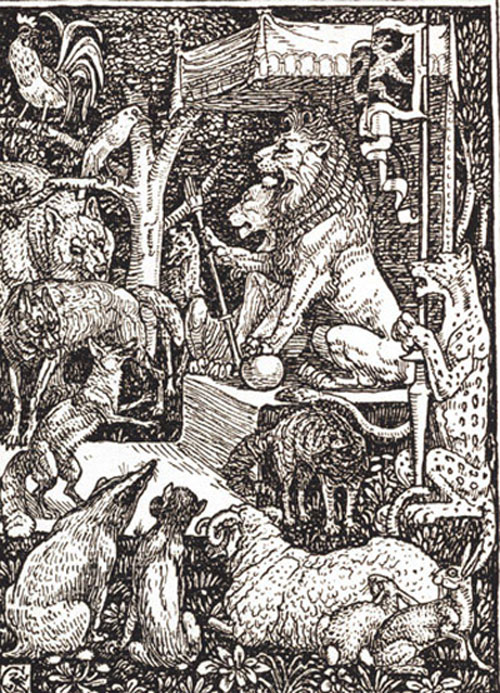 [Reynard the Fox at the Court of the Lion King Nobel, illus. by Walter Crane, for The History of Reynard the Fox, by F.S. Ellis, 1894, image courtesy of Beinecke Library, Yale University]

So of course a trickster spirit like the fox is a perfect fit for chatroulette. Shakko, the red fox, is a manifestation of a kitsune, a Japanese fox spirit that takes on animal or human form. Here, in a therianthropic reversal, a simple mask invokes the latent ghosts in the machine:

But we’re well past the age of gods, even the age of their deaths. In a twist particularly suited to our own postmodern era, Shakko has no words; she has no path, no defining tale. Is she a trickster at all, or is she a mere echo in a plastic mask? On this point, as on others, she is silent. 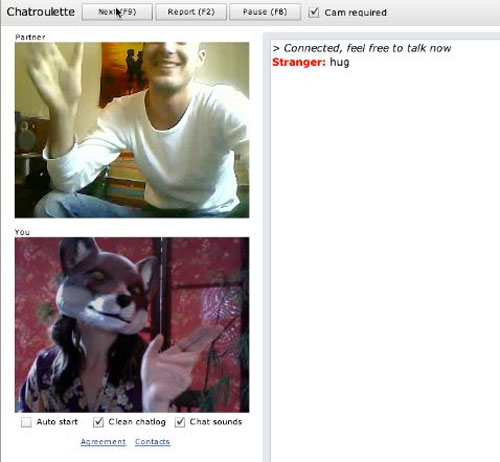 So why then call it a narrative intervention? What kind of a plastic trickster has no tricks? What kind of storyteller tells no story? Well, that’s not quite accurate —Shakko tells many stories, just none of her own. She tells yours. Her appearance on the screen mirrors you back to yourself, to recognize the trickster within, to author your own ambiguity, to recognize this difficult, fascinating place in the mirror for what it is: a stage.

It follows that if the whole area of terra firma is owned by A, B and C, there will be no place for D, E, F and G to be born, or, born as trespassers, to exist.

If everything is already occupying its assigned category, and if all the categories are assigned, then we can’t create anything new: chaos is the cauldron of creation. And even if we don’t feel particularly devilish, we’re all occupants of the borderlands; trickster territory underlies all our careful plans and grids, and can reverse the virtual and the real with the flick of a tail.

The reason the Circuit was fiction was not just that Michael York would never really condescend to a caftan. It’s that the Circuit was just too easy. As is chatroulette — the quoi will never fit into the database, the “next” button will never produce the zipless fuck. Or true love. The dream of perfection, and the perfect technology to mediate it, is just that, a dream. The reality is a little more compromised, a lot more entangled, generously ambiguous, and endlessly resistant to rampant quantification.

In the absence of gods we need to mind the gap, but we often don’t realize it until something startles us out of our unintended complacency, like a sudden, masked entity. We’re our own guides, and we need to mirror ourselves, and our drives, back to one another, each to each. Our secular era turns out to contain powerful, dangerous tricksters, and by that I mean: all of us. You never know when you’ll be called upon to be one; but, as Yoda says, you will be.

[Shakko is a creation of Siri Woodget, who performs and creates in various real and virtual territories.]